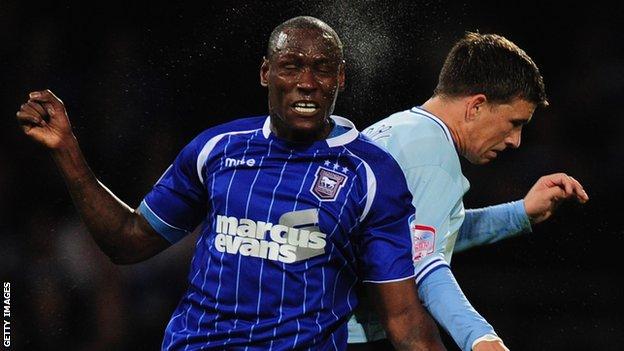 Ipswich Town defender Ibrahima Sonko will not be offered a new contract and will be released in the summer.

The 31-year-old, who joined from Reading last August, has played 21 times in an injury-ridden season.

"In this economic climate, there's not as much money around," boss Paul Jewell told BBC Radio Suffolk.

"So we've got to be a bit more circumspect with the contracts and unfortunately for Ibrahima, we're releasing him."

Ipswich's Out Of Contract Players

Town have won 45% of games the Senegalese has started this season, but an ongoing knee complaint and more recently a rib injury have restricted his game-time.

"He's been a smashing person to have around," added Jewell.

"Whatever he gives, he gives his best. He was part of the team that had a really good run.

"But since he's been injured the last 17 or 18 games, he hasn't been able to get back into the team."

Meanwhile, the continuing saga of Grant Leadbitter's future will extend into next week.

The midfielder is one of seven first-team players out of contract in the summer and Jewell hoped to have news on the 26-year-old's plans before the weekend.

"It's a huge decision for Grant. It's probably the biggest move of his career," he said.

"He's very ambitious and he's getting married in the summer so he's got a lot of things to consider.

"But we are hopeful he will sign here. We'll need to know by the end of next week."

Jewell is "confident" defender Tommy Smith will sign a new deal but is less certain on Lee Bowyer.

"We're still talking," he said of the former Leeds midfielder. "We'll see what happens over the next couple of weeks."

"He's made it pretty obvious he doesn't want to sign here. We're due some compensation," he said.

"I think he's got something fixed up somewhere else. We just have to protect ourselves a wee bit."