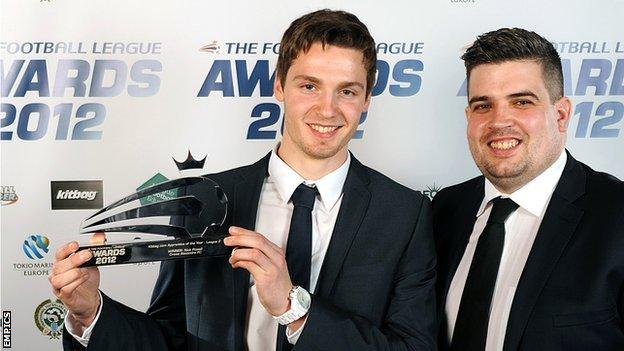 Crewe Alexandra assistant manager Neil Baker says midfielder Nick Powell has the potential to be the best ever graduate from the Alex academy.

Powell, 18, who has been linked with a host of Premier League clubs, swept the board at the club's awards dinner.

It is the first time in Crewe's history that a player has scooped every gong.

"It will take a lot of doing, but he could be the best of the lot. He's earned it. He's a special player," Baker told BBC Radio Stoke.

His measured 30-yard strike in the 4-3 win at Gillingham was also named Goal of the Season.

The awards are piling up for Powell, who also won the League One Apprentice of the Year award in March.

"He's not only a great individual, he works hard for the team as well," Baker added.

Representatives from Manchester United, Arsenal and Chelsea have been among Premier League scouts present at Gresty Road to watch Powell this season.

He is the latest exciting talent to roll off the Crewe conveyor belt, and follows in the footsteps of Danny Murphy, Craig Hignett and Dean Ashton.

And Baker, who has helped manager Steve Davis steer the Alex from 18th to a play-off place since taking over last November, believes Powell could become the best of them all.

"He may be better than any of them, and we've had some special players over the years."