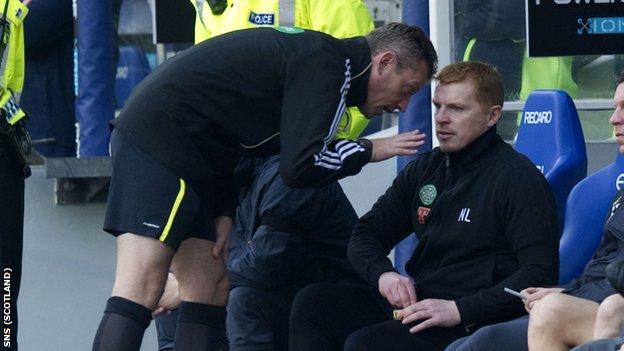 The Scottish FA decided his sending off at half-time in the 3-2 defeat was sufficient sanction.

"Neil was vindicated by the decision from the SFA in that he didn't get any suspension from that game," he said.

"I was extremely surprised at the time that he was sent to the stands."

The Celtic boss received a two-match touchline ban after criticising referee Willie Collum for failing to award Anthony Stokes a penalty in the 1-0 Scottish League Cup final defeat by Kilmarnock.

However, Lennon was not punished further for his dismissal at Ibrox and Mjallby defended his manager.

"It was a fair hearing and we're happy with the outcome to what happened during the Old Firm game," he said.

"I was extremely surprised at the time that he was sent to the stands (by referee Calum Murray). I was surprised that he was not allowed to do his job in the second half.

"I don't really know why, I think it was because he acted in an aggressive manner.

"You're always disappointed when your manager isn't going to be able to do his job for two games.

"I think he's doing a great job for the club and as a manager. In the future I think maybe he will calm down.

"He's not brand new but he hasn't been in the job for too long."