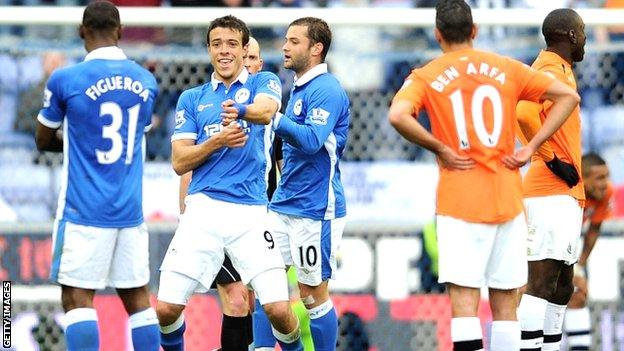 Wigan made it five wins out of seven as they moved three points clear of the relegation zone and dented Newcastle's hopes of finishing in the top four.

Victor Moses headed home to open the scoring and fired a second past Tim Krul less than two minutes later.

Shaun Maloney slotted in to extend the lead and Franco di Santo curled a brilliant fourth just before half-time.

The Latics looked destined to go down for much of the season but incredibly they have taken 15 points from a possible 21, with two games remaining.

Roberto Martinez's men have lost just three of 13 fixtures since the start of February and will be confident of extending their Premier League stay to eight years.

Their feat was all the more remarkable given that Newcastle arrived at the DW Stadium following a run of six consecutive wins.

They remain in fourth place but know if Tottenham beat Blackburn at White Hart Lane they will drop to fifth on goal difference.

Fourth spot could ensure qualification for the Champions League - but only if Chelsea lose this year's final against Bayern Munich on 19 May.

Wigan passed and moved with pace and intent from the very first minute, utilising their wide players to pin their opponents back.

Their reward came when Emmerson Boyce crossed from the right and Moses held off Mike Williamson to nod the opener.

It was the first goal Newcastle had conceded in four games and they looked shell-shocked.

Yet that was no excuse for the space they afforded Wigan on their next attack as Maloney and Moses combined to feed Jean Beausejour.

The Chilean's cross was only partially cleared by Fabricio Coloccini and an on-rushing Moses slotted first-time into the bottom corner.

Newcastle tried to respond - Hatem ben Arfa curling a set-piece narrowly off target - but the visitors were horribly out of sorts.

Further punishment arrived when Di Santo threaded a pass behind Davide Santon for Maloney to race clear and finish across Krul.

Newcastle complained that James McCarthy was only cautioned for a challenge on Yohan Cabaye and then went close as Demba Ba drilled wide.

However, that was their only period of in the ascendancy all half and two minutes into stoppage time Wigan struck again.

Maloney shifted possession to Di Santo and with Cheik Tiote standing off, the Argentine unleashed a sensational curling chip.

Newcastle memorably came from 4-0 down at half-time to draw 4-4 with Arsenal last season and boss Alan Pardew would have sought a similar response on this occasion.

Yet it was Wigan who started the second half with greater urgency and Moses sliced wide before drawing a one-handed save from Krul.

It took a goal-line clearance from Coloccini to deny Wigan substitute Conon Sammon, but the result was never in doubt.