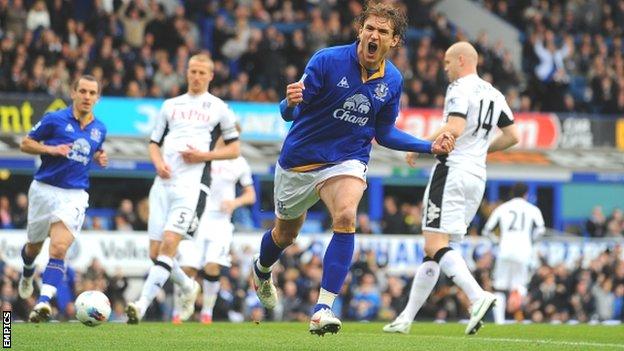 Nikica Jelavic scored twice as Everton moved a step closer to their goal of finishing above Liverpool with an emphatic victory at Goodison Park.

The Croatian struck twice before half-time, with Marouane Fellaini adding another to make it 3-0 at the interval.

The Toffees are finishing the season as strongly as anyone, with manager David Moyes determined to secure the eighth top-eight finish of his 11-year tenure.

Everton have not finished above Liverpool in the Premier League table since 2005 but they have now scored four goals in three consecutive league games.

Much of that has been down to the form of Jelavic, who signed from Rangers in January. And he stole the show again, this time at the expense of Fulham's defenders.

Cottagers manager Martin Jol missed the trip to Merseyside with a chest infection, leaving first-team coach Billy McKinlay in charge for the day.

If that illness had not been enough to rule Jol out, a quick glance at the record books might have left the Dutchman feeling sick.

Fulham had lost their previous 18 matches at Goodison Park, their last victory coming in February 1948, their last point in 1959.

Recent history also provided Everton supporters with confidence. The same side that held Manchester United to a 4-4 draw at Old Trafford took the field and began where they left off last Sunday.

Sharper to the ball, swifter to use it, Everton snatched the initiative from the off.

Steven Pienaar's quick feet won an early free-kick as Moussa Dembele lunged in. Jelavic's curling effort only got as far as Pavel Pogrebnyak, who raised his hand in front of his face to block the ball while standing in the penalty area.

Referee Phil Dowd had no hesitation in pointing to the spot. Jelavic made no mistake, taking his tally to nine goals since his move to Merseyside.

The Croatian striker almost scored a second minutes later, latching onto Phil Jagielka's long ball, outmuscling Brede Hangeland only to fire his shot against the right-hand upright. A minute later Fellaini did double the lead, heading in unmarked from a right-wing corner.

Fulham had chances and might have pulled a goal back but for a fantastic save by Tim Howard.

Clint Dempsey's deflected shot appeared to have wrong-footed the American goalkeeper, but he quickly changed direction, thrusting his right hand up to deflect the shot up and over the bar.

Everton were in command, though. A delightfully weighted pass by Pienaar sent Jelavic clear, he beat a charging Mark Schwarzer to the ball, turned and shot beyond the lone Fulham defender on the line.

The second half offered little respite for the visitors. Cahill, who replaced the injured Darron Gibson at half-time, added a fourth on the hour mark, latching onto Pienaar's chipped through-ball to beat Schwarzer.

Jelavic came within a whisker of his hat-trick with a curling free-kick, but Schwarzer came to Fulham's rescue on a day they will want to forget.

Everton manager David Moyes: "The two early goals helped us control the game. It was a really good performance and three important points. I enjoyed the way we played, we played some really good football.

"I think we have played as well as any team in the Premier League since January. It is what we have done over recent years. Some teams start the season at the top of the league and fade away. We start at the bottom and rise up and get better near the end of the season.

"We feel if we can get the ball anywhere near Nikica Jelavic in the box, we have a chance. To score another two today, albeit one a penalty, was a fantastic return."

"We never turned up. That wasn't us today. There are a lot of disappointed guys in the dressing room. The manner of the defeat was disappointing.

"We have come here confident we could get a result but credit to Everton they put us under a lot of pressure. Losing an early goal doesn't help you, but I don't think we got started all game. I have had a look at the penalty and if it was in our box we would have been looking for penalty kick, we have no complaints.

"Hopefully Martin [Jol] should be back on on Tuesday, he has a chest infection and was advised just to rest up for a couple of days. Hopefully we will see him on Tuesday."