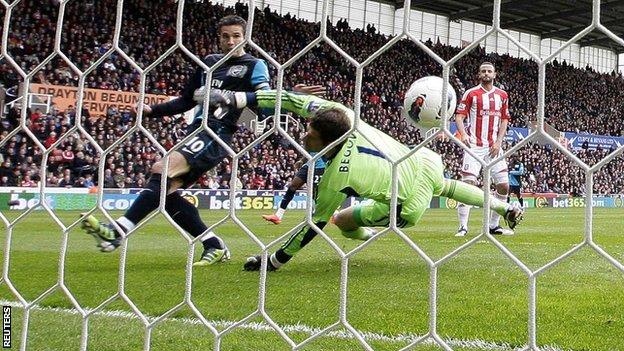 Arsenal moved closer to securing third place in the Premier League despite being held to a draw at Stoke.

The Gunners fell behind when Peter Crouch headed a Matthew Etherington cross into the bottom corner.

The visitors quickly responded with Tomas Rosicky's inviting cross being guided in by Robin van Persie.

Arsenal's Yossi Benayoun had appeals for a late penalty waved away after a Glenn Whelan challenge as both teams settled for a point.

Arsene Wenger's Arsenal can finish third if they beat Norwich and West Brom in the final two games as the significance of a top three spot has increased with Chelsea's progress to the Champions League final in Munich on 19 May.

If Chelsea finish outside the Premier League top four and win in Germany then fourth place in the top flight will have to make do with a spot in the Europa League.

Arsenal come away from the Britannia Stadium with a point which is more than they often leave Stoke with. A game that was highly competitive, played with a good tempo and highly-charged.

With such high stakes, Stoke would have been one of the last places Wenger's side would have wanted to visit.

The aesthetic football of Arsenal has regularly struggled to flourish at the Britannia Stadium with the Gunners having lost three of their last four games against the muscle of Stoke going into the match.

This time around, Arsenal displayed plenty of intent and industry as they combined the style of their football with the substance they are often criticised for lacking.

The Potters had quickly started to employ the tactics that have proved successful in the past as they pressed Arsenal and tested the resolve of the Gunners defence with some searching aerial balls.

The visitors seemed ready for the challenge though and Arsenal carved out two early chances, with Stoke keeper Asmir Begovic saving from Benayoun and excellently palming a Van Persie header round the post.

But Stoke still took the lead in trademark style as Etherington's cross was nodded in by Crouch, his seventh Premier League goal against the Gunners.

The lead lasted six minutes before Benayoun tenaciously won possession and found Rosicky, who crossed for Van Persie to sidefoot in for his 28th league goal of the campaign.

Gervinho then failed to get his head on a Bacary Sagna cross as Stoke's 53rd game of the season appeared to be taking its toll.

Stoke regrouped and regained their composure at the half-time interval and chances were at a premium thereafter.

The main moment of controversy from the game arose late on when Benayoun went down in the box after a Whelan challenge. While Arsenal will claim a barge, Stoke will argue the Arsenal midfielder went down too easily.

Stoke threatened in the final minutes when a Rory Delap long throw caused concern in the Arsenal box before Sagna hooked away the danger from his goalmouth.