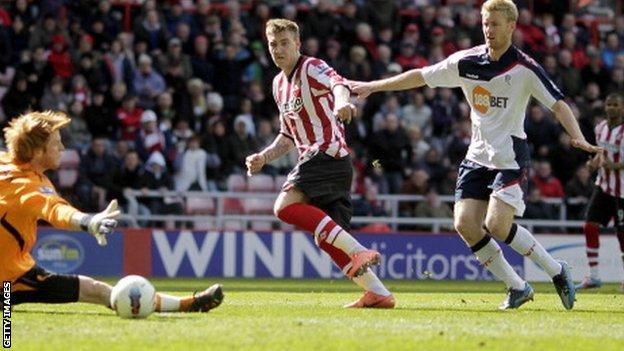 Kevin Davies scored twice to earn Bolton a valuable point as Sunderland failed to win for a sixth league game.

James McClean's sublime free-kick put the Black Cats ahead until Davies again showed why Sunderland wanted to buy him in January.

The 35-year-old headed a cross by Sam Ricketts into the net to lift Bolton level on points with 17th placed QPR.

Bolton had shown great spirit to come from behind to defeat Aston Villa in midweek yet they were guilty of blowing a priceless lead this time before fighting back to claim a point.

With matches against Tottenham, West Brom and Stoke to come, Bolton desperately needed to follow up the midweek win at Aston Villa with another three point haul on Wearside.

Yet the thumping win by Bolton's fellow strugglers Wigan over Newcastle means Owen Coyle's side face a nail-biting fight to the finishing line.

Sunderland gave a first start since February 2011 to Craig Gordon, the Scotland keeper fighting his way back from a knee injury.

Yet Gordon found himself fishing the ball out of his net after 26 minutes when the unmarked Davies volleyed home from six yards after Petrov's looping cross.

Nicklas Bendtner's goal was Sunderland's first for 431 minutes - or seven hours and 11 minutes.

Veteran Davies, linked with a move to Sunderland in the January transfer window, rolled back the years as he marked his return to the side with a delicious finish soon after Nigel Reo-Coker had gone close from distance.

Mark Davies also forced Gordon into a smart save before John O'Shea went close, with a glancing header, to netting his first goal since joining Sunderland from Manchester United last summer.

But the Black Cats found the right combination to unlock the visitors' defence in the 36th minute when Bendtner controlled a defence-splitting pass by the impressive Jack Colback before sliding home his side's first goal in five games.

The defending leading up to Bendtner's eighth goal of the season will have left Coyle livid and the Bolton manager's mood will not have improved when McClean made it 2-1 from a delightful 55th-minute free-kick.

The set-piece was awarded after Stephane Sessegnon felt the full force of a late Kevin Davies tackle, McClean finding the net despite keeper Adam Bogdan getting a hand to the ball.

But defeat for the visitors would have been cruel, and they claimed a deserved point when full-back Ricketts crossed for Davies to head firmly past Gordon in the 70th minute.

They might have snatched victory at the death when Kevin Davies headed down yet another Petrov cross to Klasnic, but Gordon managed to block his shot on the turn with his foot to spare his side further misery.