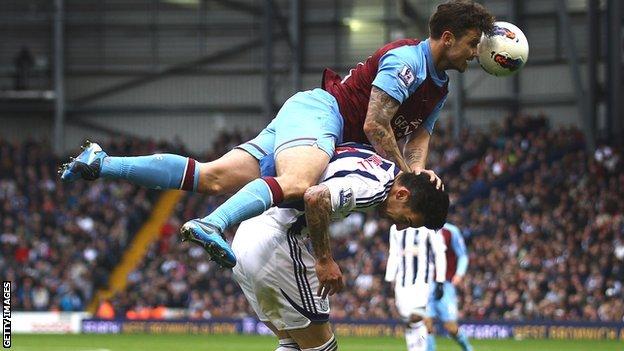 But the hosts were denied what appeared a blatant penalty after the break when Alan Hutton diverted Liam Ridgewell's header over the bar with his arm.

Both teams had great chances in a frantic finale, but could not convert.

West Brom's Jonas Olsson produced a superb sprawling block to keep out Ciaran Clark's shot as the match suddenly sprang into life in the final 10 minutes.

And moments later home keeper Shay Given made a magnificent save with his legs from Peter Odemwingie.

That stop ensured Villa, whose fans rounded on manager Alex McLeish after the midweek defeat against fellow strugglers Bolton Wanderers, remain three points clear of the relegation zone after Bolton's 2-2 draw with Sunderland.

But despite seeing their winless run stretch to eight games, the performance was much improved.

A West Brom side chasing a fourth win in five games and their best top-flight finish since 1981 - as well as a first double over Villa since the 1973-74 season - played with more cohesion and finished the stronger.

But it was Villa who carved out the better opportunities before the interval with Agbonlahor the main threat.

Twice the Villa striker's searing pace allowed him to get in behind right-back Billy Jones, but twice he was denied by Foster.

The England keeper dived bravely at Agbonlahor's feet after the Villa man took a heavy touch as he latched onto Emile Heskey's flick. And Foster then blocked Agbonlahor's shot when the forward outpaced Jones for a second time.

Chris Herd also had a great chance but could only shoot straight at Foster after some wonderful wingplay by the inspirational Richard Dunne, who was back in the side after a 10-week absence with a broken collarbone.

Both teams continued to look dangerous on the break after the interval, with the excellent Agbonlahor setting up a fine chance for Charles N'Zogbia and Odemwingie seeing his strike cleared off the line by Carlos Cuellar.

But West Brom also started to pose a threat from set-pieces.

They were convinced they should have been awarded a penalty when Hutton moved his arm towards Ridgewell's goalbound effort following a corner, diverting the ball over the bar.

Villa, who had earlier claimed a spot-kick of their own when the ball skidded up and hit Chris Brunt on the arm, also claimed a penalty when Olsson slid in to block Clark's low strike. But neither shout looked as strong as West Brom's.

And a breathless conclusion, in which both teams went all out for victory, failed to bring a goal, ensuring Villa are still in danger of the drop with two games left.

"It was a strange 0-0. There were a lot of goal chances for both sides and could have ended 2-2. They are battling away for their lives.

"I believe it was a penalty [for Hutton handball]. The linesman should have had a clear view but he didn't give it. It was a penalty but these decisions do get missed.

"Villa worked hard and deserved their point. It was a fair result. Both teams will point to good chances but we should have had a penalty and Shay Given made a magnificent save from Peter Odemwingie.

"There were opportunities at both ends, but we should be happy with our tenth clean sheet of the season."