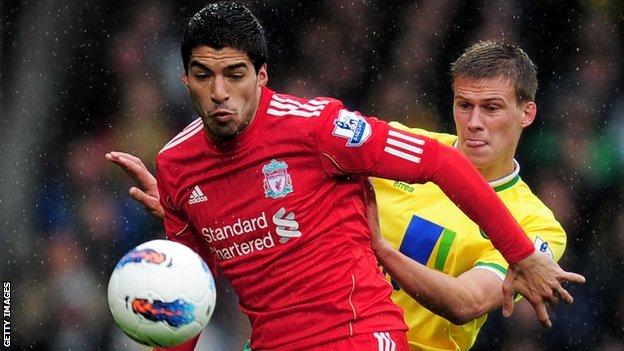 A Luis Suarez hat-trick, including a brilliant strike from 45 yards, helped Liverpool ease past Norwich as they hit form ahead of the FA Cup final.

Suarez scored his first after seizing on Steven Gerrard's through-ball and curling into the far corner.

His second followed when he surged down the right and fired beyond John Ruddy.

Jonjo Shelvey hit the bar with a header before Suarez completed his hat-trick in stunning fashion, lobbing Ruddy from close to the halfway line.

Suarez's third was the pick of an impressive bunch as he pounced on Elliott Ward's failure to keep possession near the halfway line then, spotting Ruddy off his line, executed an inch-perfect chip over the sprawling keeper.

It sealed a welcome victory for Liverpool, who had looked in danger of sinking into the bottom half after winning two of 11 league matches before this one.

Although Chelsea await in the Cup final on Saturday, Kenny Dalglish's team did not look distracted as they recorded back-to-back away wins for the first time in six months.

Mid-table Norwich look like a side who are winding down for the season and have lost three in a row for the first time in this impressive campaign.

It was an uncharacteristically clinical first-half display from Liverpool, with Suarez looking sharp and working well in tandem with the returning Gerrard, who had been rested the previous week against West Brom.

"There was no doubt about who the star of the show was. In the first half, Liverpool had two shots and Suarez scored two goals, both clinically taken after lackadaisical moments from Norwich. The third was sublime."

Liverpool wasted more chances in the second period but still looked in command. Paul Lambert's men were sloppy and missed the final-third physicality of Grant Holt, who only came on for the final 15 minutes.

Holt's omission was one of five changes, which was the same number of alterations that Liverpool made to their starting line-up, as Andy Carroll was left out of the squad.

That meant there were 15 English players starting, equalling the most in a Premier League fixture this season, the other being Bolton v Stoke on 6 November.

With so many changes, it was a low-key opening quarter as neither side gelled particularly effectively, but Norwich switched off for a four-minute spell and Suarez punished them.

Gerrard provided the spark that led to Suarez's opener. He caught David Fox napping by intercepting a weak pass and then delivered the ball early to the Uruguayan, who burst clear and curled the ball into the far corner.

Liverpool nearly added a second instantly as Suarez cut the ball back for the unmarked Gerrard, whose 16-yard shot was blocked by Ryan Bennett.

Norwich were looking unsettled and the next goal came when Ward's failure to keep the ball allowed Suarez to go racing down the right flank before cutting inside and arrowing in powerfully. After that, Dalglish's men started looking comfortable in possession and in control of the game.

More fight was shown by Norwich early in the second half as Elliott Bennett unleashed a 25-yard effort that Pepe Reina saved, then Bradley Johnson headed wide from Anthony Pilkington's corner.

After Liverpool wasted several more opportunities, including Shelvey's headed attempt and a Suarez chip from 16 yards, Norwich sensed they could find a way back. James Vaughan headed wide from Russell Martin's cross and had a shot blocked by Jamie Carragher.

When Jonjo Shelvey hit the bar early in the second half, it was the 31st time Liverpool have struck the woodwork this season, more than any other Premier League side

But the game was over when Suarez sealed his first Liverpool hat-trick in sublime style.

Norwich manager Paul Lambert: "You can't defend in that way against that calibre of player and think you can get away with it. If you're not 100% on your game, these things can certainly happen.

"It's a sore one. There are not many times when I have walked away from here disappointed in the three years I've been here but that was disappointing.

"I don't think we're ever lost three in a row - it's not too bad that it's taken this length of time - but we've still got two massive games to try to get through and that's what we'll try to do."