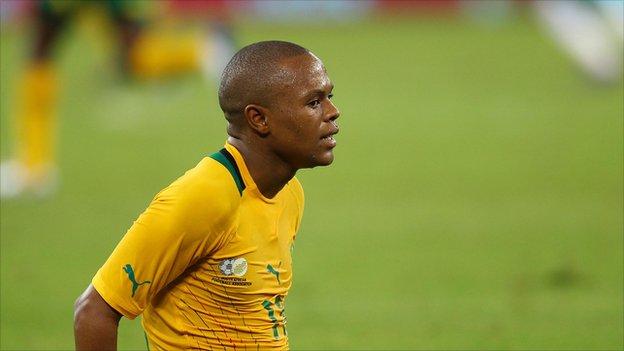 Bafana Bafana winger Thulani Serero is hoping to put his injury-plagued debut season in Europe behind him and help lead his country to African Nations Cup glory on home soil next year.

The 22-year-old became the most expensive transfer in South Africa's Premier Soccer League history when he joined Ajax Amsterdam last summer for £2.1m.

However, a pelvic bone injury picked up in Ajax's Champions League group stage clash with Real Madrid back in September has restricted Serero to only seven substitutes appearances for Frank de Boer's side in the Eredivisie.

But despite that disappointment, he is now hoping to be fit to play a part in South Africa's first 2014 World Cup qualifier against Ethiopia in June as they prepare to host the 2013 Africa Cup of Nations in January.

"Obviously I want to play every game for Ajax but I have to be careful with my injuries. It's still not 100% but I am working hard and hopefully I can get some game time before the end of the season."

Serero added: "It's a big year for Bafana Bafana with the Afcon but we all want to do it for the country. The main goal is to win the tournament and I think we are 100% good enough to do that. Every player knows what is expected of him and it is a great chance for us to be playing in front of our own supporters."

An appearance off the bench in Ajax's 2-1 win over Manchester United at Old Trafford back in February was the last time Serero featured for the reigning Dutch champions, who now look destined to retain their title after compiling a run of 10 consecutive victories.

While it has been a frustrating few months for the Soweto-born player, he has been assured by De Boer that his time will come.

"He told me that for every foreigner who comes into the team, the first season is about learning and fitting into the Ajax system so I mustn't stress myself and feel like I'm under pressure to perform," said Serero.

"Everything happens for a reason. I've always had little injuries throughout my career but none that have taken such a long time to recover from. I came back too early thinking I was OK but the same things happened again. It's important to adapt and be ready to play regularly next season. I feel confident that I can do that."

His former South Africa under-20 team-mate Kamohelo Mokotjo is currently on the books of Ajax's big rivals Feyenoord and had his first taste of the Eredivisie's biggest derby match in January's 4-2 win. But having missed out on selection for that game, Serero is already plotting his revenge for their next showdown.

"I'm comfortable at this level and my goal is to be a regular in the team when we play Feyenoord again next season," he said.

"We will see - now it's too early to tell. If I can stay injury-free, then it will make things easier for me."