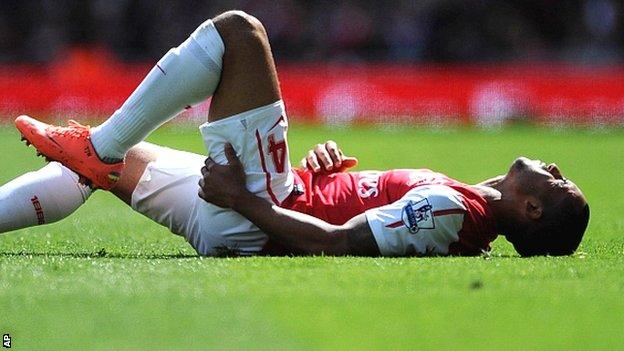 Arsenal manager Arsene Wenger says Theo Walcott is likely to miss the rest of the season with a hamstring injury, but should be fit in time for Euro 2012.

The 23-year-old winger hobbled off in clear discomfort after 60 minutes of Arsenal's 0-0 draw against Chelsea.

"It looks like a serious hamstring," said Wenger. "I think now for him it will be tough to come back before the end of the season.

"It is usually 21 days [minimum]. He should be OK to play for England."

Arsenal travel to Stoke next Saturday and host Norwich a week later before finishing the campaign at West Brom on 13 May.

England depart for the European Championship in Poland and Ukraine on 6 June, with their first match against France in Donetsk on 11 June.

Walcott, who has scored 11 goals in 44 appearances this season, is expected to be named in England's squad for the tournament.

"First we assessed the hamstring," Wenger explained. "He wanted to go on and stay on the pitch.

"I think he should have gone off straight away because the second time it was a real hamstring [injury].

"He will have a good rest but I don't think he will be ready to play for us."

England have already lost the services of Arsenal midfielder Jack Wilshere, whose ankle injury has seen him miss the entire season.

Gunners midfielder Mikel Arteta will also miss the rest of the campaign after damaging ankle ligaments.