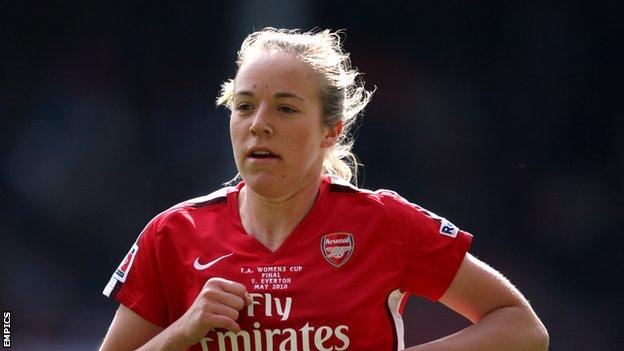 Second-half goals by Dzenifer Marozsan and Jessica Landstrom gave Frankfurt a deserved win and the chance to become European champions for the fourth time.

Arsenal manager Laura Harvey admitted: "They were better than us today.

"We didn't play well in the first half, but once their first goal went in we just had to go for it and we were more of a threat in the last half-hour.

"But in truth it was last week's result that killed us - we played well and should really have gone into this second leg with a lead.

"It was always going to be extremely hard to come back against one of Europe's very best teams on their own pitch, and we weren't good enough on the day."

In torrential rain, Harvey's team posed no real threat in the first half while goalkeeper Emma Byrne had to save well from Melanie Behringer's 19th-minute free-kick.

Marozsan, who had also scored in the first leg, hit the opening goal on the hour with a shot that deflected off England right-back Alex Scott to land in the net.

Scotland midfielder Kim Little and substitute Gemma Davison both went close to equalising as Arsenal tried to force their way back into contention.

But Marozsan went close to bagging a second goal when she hit the woodwork with a good effort in the 83rd minute.

And two minutes later it was the striker's free-kick that led to Landstrom turning the ball in for the knock-out blow.