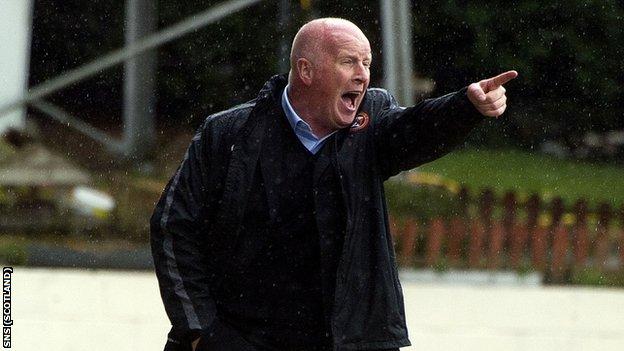 Dundee United manager Peter Houston is trying not to focus on a potential Champions League qualifying spot after his side moved closer to Motherwell.

With Rangers unlikely to be eligible for Europe next season, third-place 'Well and United are battling to join Celtic in Europe's premier competition.

"It'd be nice but I'm not even thinking about it," said Houston after the 2-0 win at St Johnstone.

"We know if we win the last four, we could be in a Champions League spot."

Houston was "absolutely delighted" with the victory at McDiarmid Park, which featured goals by Scott Robertson and John Rankin and took United to within three points of 'Well, who play Celtic on Sunday.

"We could've lost a couple of early goals because we didn't start as well as them," added Houston.

"We got a good goal and we could've scored more in the first half. We certainly took the game to St Johnstone.

"I don't think the sending off [of St Johnstone's Francisco Sandaza] helped us much because we stopped passing the ball as well and became a bit jittery.

"But, great credit to the defence, they held firm.

"We look after ourselves, we don't look at what other teams are doing. A lot of hard work ahead, especially with the Old Firm [to play] and then Motherwell in the last game of the season.

"We don't fear anyone at any time.

"When I looked at the squad at the start of the season, I would've been delighted with top six and we've achieved that but once you're there, you want to finish as high as possible and great credit to the players because they're doing well."