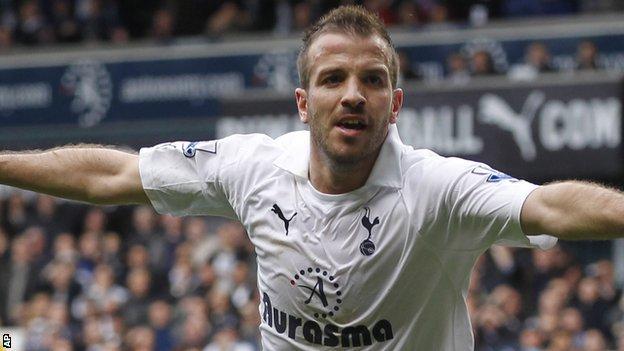 Tottenham moved back into fourth place in the Premier League as they beat a poor Blackburn side whose relegation fears increased with the defeat.

Rafael van der Vaart lashed Spurs ahead with a close-range shot after Gareth Bale's header came back off the bar.

Kyle Walker curled in an exquisite 25-yard free-kick to secure a home win against second-from-bottom Rovers, who did not muster a single attempt.

After one win in nine, Tottenham knew they needed a victory after Chelsea had overtaken them with a win against QPR and the White Hart Lane outfit duly rose to the challenge as they leapfrogged the Blues and Newcastle to regain fourth spot.

Spurs will now hope they can continue their return to form and finish third, as they know fourth place will not be good enough for a Champions League spot if Chelsea win the final of Europe's top club competition on 19 May.

"Spurs are back to winning ways to give them hope of a Champions League place and they could have had four or five. Blackburn got what they deserved, absolutely nothing. This was a poor performance by them and they will need a huge improvement to stay up."

Blackburn had the incentive of drawing level with relegation rivals Bolton and QPR but, while there was plenty to admire about Spurs, Rovers succumbed in a fashion which left ominous signs that the drop looms.

The visitors have the worst record in the top flight for conceding goals on the road and, after quickly retreating under Tottenham's pressure, they soon surrendered the lead.

A long-range Sandro shot smacked against the crossbar before Bale's header from Aaron Lennon's cross came off the woodwork and Van der Vaart pounced.

It was a Spurs performance which possessed much of what has been behind their success this season, with the movement and vision of Luka Modric and Van der Vaart proving key.

The home side's passing was sharp, there was pace and purpose to their play and, most importantly, they finished off their superiority with two goals after a run of scoring six in eight Premier League outings.

The woodwork had rescued Blackburn when a Gallas header hit the crossbar and, although Spurs had to wait until the 75th minute to add a second, it was worth the wait.

Right-back Walker curled a long-range free-kick out of the despairing reach of ex-Spurs keeper Paul Robinson.

Blackburn might have attempted to take the game to Spurs considering their precarious position but they failed to test home keeper Brad Friedel, leaving them three points from safety with games at home to Wigan and away to Chelsea left.