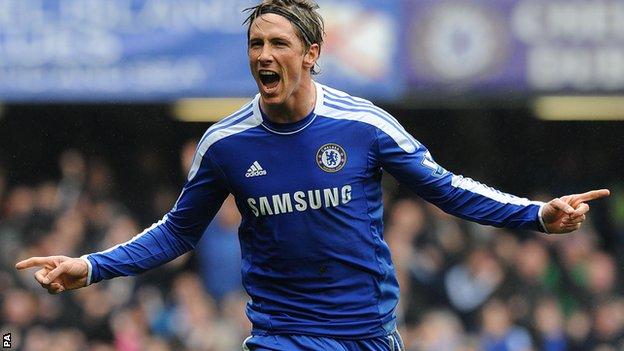 Fernando Torres scored a brilliant hat-trick to boost Chelsea's hopes of a top-four finish and pile the misery on relegation-threatened QPR.

Daniel Sturridge scored after 45 seconds before John Terry headed home and Torres struck twice as Chelsea swept into a 4-0 lead after 25 minutes.

Torres sealed his hat-trick after the break, with Florent Malouda making it 6-0 before Djibril Cisse's consolation.

Chelsea are sixth, with QPR above the drop zone on goal difference.

Playing with the sort of confidence and ability which persuaded Blues owner Roman Abramovich to pay £50m for his services, Torres ripped the Rangers defence to pieces with his direct running and clinical finishing.

Clearly buoyed by his goal against Barcelona in the Champions League, he continually latched on to clever, probing through balls from Juan Mata, Salomon Kalou and Sturridge.

And if the Champions League victory over Barcelona was built on solid foundations, this demolition was more to do with sheer skill and class.

From the moment Sturridge cut inside and fired home from 25 yards, there was only going to be one winner.

Terry doubled the home side's lead, heading home Mata's corner, before Torres ran on to Kalou's delightful pass to round Paddy Kenny and make it 3-0, with his second coming as Nedum Onuoha and Paddy Kenny made a complete hash of a clearance.

After Mata missed a good chance to make it five shortly after half-time, Jamie Mackie almost offered his side something to cheer about when his stinging shot was turned wide by Petr Cech.

Torres looked to be getting closer to his first hat-trick since 2009 when his powerful shot from the edge of the area was beaten away by Kenny.

And the moment finally came in the 64th minute when the Spaniard was put through on goal by Mata's inch-perfect pass and he side-footed into the far corner.

Substitute Malouda made it six when he smashed in from close range before Cisse hooked a shot across Cech into the net.

It was of little consolation for the Hoops, whose inadequacies were woefully exposed by their rampant hosts.

There was still time for Chelsea supporters to sing the name of caretaker manager Roberto di Matteo and, after finally getting the best out of his owner's £50m investment, what price the Italian being given the job on a permanent basis?