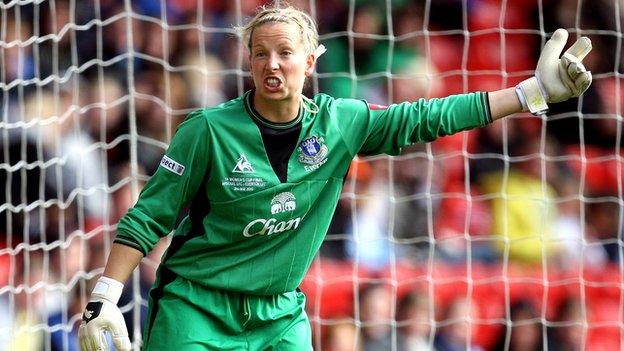 Chelsea recovered from 2-0 down to earn a point against Liverpool and go top of the Women's Super League.

Keira Ramshaw hit a hat-trick for Sunderland as they powered their way into the Premier League Cup final with an 8-0 win against Blackburn Rovers.

And Leeds' 2-0 win against Coventry City means the Premier League's top two will meet in next month's final.

Liverpool earned their first point of the season but looked like they might take all three after a tremendous opening half-hour.

Kelly Jones shot the Reds in front from a 15th minute penalty following a handball by Katie Sherwood.

Jones then sent in a 21st minute cross for Hannah Keryakoplis to double the lead with a 15-yard drive.

And England midfielder Dani Buet levelled the scores with an exquisitely-struck 20-yard free-kick six minutes after the interval.

Though the Blues then bossed the second half they could not find a winner, but the result meant they edged themselves ahead of Lincoln at the top of the table.

Birmingham created the better chances throughout their game against Everton and the Toffees had Brown to thank for their first point of the season.

England striker Eni Aluko was unlucky not to give the visitors the lead with an early effort that hit the woodwork.

Brown then made great saves from another England striker, Rachel Williams, either side of half-time and also brilliantly denied Aluko in the second period.

Four goals in each half summed up Sunderland's massive superiority over Blackburn.

The game was as good as over by half-time, Ramshaw having hit two goals while Beth Mead and Kelly McDougall bagged one apiece against their Northern Division opponents.

Mead scored her second of the afternoon before being substituted by Robin Chidester, who, with virtually her first touch, put her own name on the scoresheet.

Sophie Williams made it seven and Ramshaw completed the rout with her hat-trick goal in the dying minutes.

Tanya Rich gave Leeds a great start, scoring the opener from a Leah Galton cross after only four minutes.

As Coventry hit back, Emily Simpkins went close with a well struck free-kick just before half-time.

Leeds pressed after the break and Sky Blues goalkeeper Sue Wood had to make a good save to prevent Galton adding a second goal.

But Wood was beaten again 17 minutes from time, when a corner was only half-cleared and Emma Johnson sent a first-time shot into the top corner of the net.

Leeds, currently two points clear of Sunderland at the top of the Premier League, will face their title rivals at Northampton Town's Sixfields Stadium on 6 May.