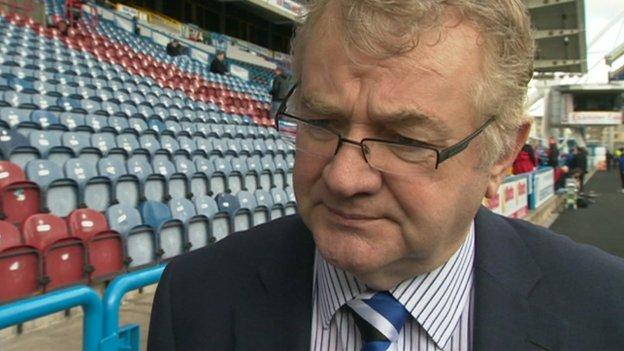 Their fate was sealed by a 2-1 defeat at Chesterfield on Saturday, ending the club's two-year stay in the third tier.

"Financially, it's disastrous because I think it will probably cost in the region of half a million pounds," Dunphy told BBC Radio Manchester.

"Fortunately we've had a good season off the field with transfers and we can weather the storm."

Dunphy continued: "We won't be going the same way as other clubs have.

"We're going to have a real go and we plan to be contenders next season."

Following promotion in April 2010, Rochdale finished their first campaign back in League One in ninth position, only three points away from a play-off place.

But Eyre was sacked before the turn of the year with Rochdale lying third-bottom in the division.

Long-serving Accrington boss John Coleman was handed the task of keeping the club in League One, and despite being unable to do so, Dunphy believes Coleman is the right man to take them forward.

"He's got all the credentials needed to rebuild a team," said chairman Dunphy. "He's proved it before in League Two and I'm sure he will do it.

"I'm as disappointed as anybody but it's out of the way now. It's a case of moving on.

"We're here to fight another day and fight we will. It's onwards and upwards from here."

Speaking after the loss at Chesterfield, Coleman told BBC Radio Manchester: "I'm devastated because we shouldn't have been beaten. We were the better team by a mile.

"Sloppy defending has cost us the game and our inability to win away from home is the reason why we've been relegated.

"I've had enough time to turn it round and enough opportunities to win enough games to stay up.

"I think we'd have stayed up if we'd have won. Two more wins would have been enough."

Rochdale complete the season with a home game against MK Dons, followed by a trip to Leyton Orient on the final day of the campaign.