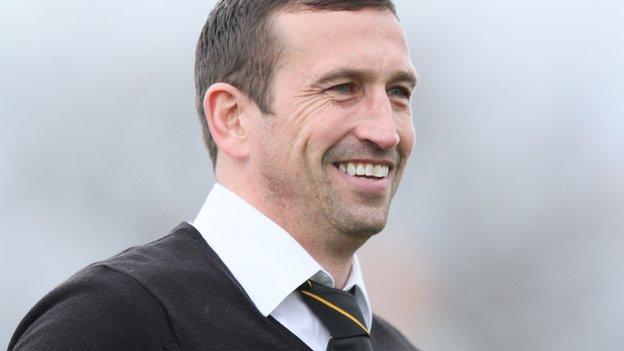 Newport County boss Justin Edinburgh has praised the club's fans after his side narrowly avoided relegation from the Blue Square Bet Premier.

County picked up the points they needed to beat the drop with a 1-0 win against Alfreton Town.

The Exiles can now look forward to a derby clash at home to play-off contenders Wrexham on Tuesday night.

"We stuck together as a football club and the fans played a major part in that," said Edinburgh.

Newport have lost 19 times in what has been a torrid season for the club's supporters.

Edinburgh, 42, took over from Anthony Hudson, who left the club in September after a run of 10 games without a win.

"To turn a team around that were classed as going to win this league, I just find that incredible," added Edinburgh, following the home win against Alfreton.

"This team that I took over would have only gone one way, and that was to relegation and I have no doubt about that.

"We had a tough time but we've done it."

In contrast, Wrexham fans are hoping for a return to League Two as their side prepares for the end of season play-offs.

The Dragons spent much of the season leading the Blue Square Bet Premier table, even after manager Dean Saunders left for Doncaster Rovers in September.

Andy Morrell took over from Saunders but was unable to hold off a relentless challenge from title winners, Fleetwood Town.

Wrexham, who are second in the table and guaranteed a play-off place with two games of the regular season remaining, lost 2-0 at Mansfield Town in their last outing and Morrell has called for an improvement against Newport.

"It was a real tough game for us and I thought we were bullied," said Morrell, after the defeat on Friday night.

"Not many positives to take out of it really.

"But the one thing is we've still got a couple of games to turn it around, and that's what we've got to do."