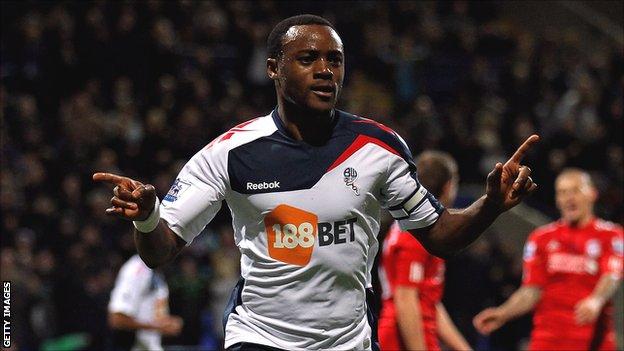 Bolton Wanderers midfielder Nigel Reo-Coker has insisted all the pressure is on Aston Villa as he returns to face his former club on Tuesday.

Owen Coyle's side, who have two games in hand on most of their rivals at the foot of the table, lie four points from safety and six behind Villa.

Reo-Coker believes a Bolton win will drag Villa into the relegation battle.

"I'll tell you now, there will be more pressure on Aston Villa than there is on us," he told BBC Radio Manchester.

"Villa are in the mix. It makes it better for us that Villa will be there and will be on the edge.

"It gives us the advantage to go there and get the result, but we have to take advantage of that. No more slack performances.

"It's about Bolton Wanderers and it's about us getting a result. That's all that matters. It's a great opportunity for us."

Three consecutive league victories at the end of March appeared to have lifted Bolton away from trouble.

But the tally from their three league games so far in April is just one point, a run that has seen them slip to second-bottom in the Premier League.

Bolton lost ground on some of the teams around them by drawing 1-1 at home to Swansea on Saturday, while QPR and and Blackburn were both victorious.

"Every game for the rest of the season is a cup final," said Reo-Coker, who spent four years with Aston Villa before moving to Bolton at the start of the campaign.

"If Wigan can go and beat Manchester United and Arsenal, then why can't we?

"We've got good games ahead of us, games where we can get points, and we have to believe."