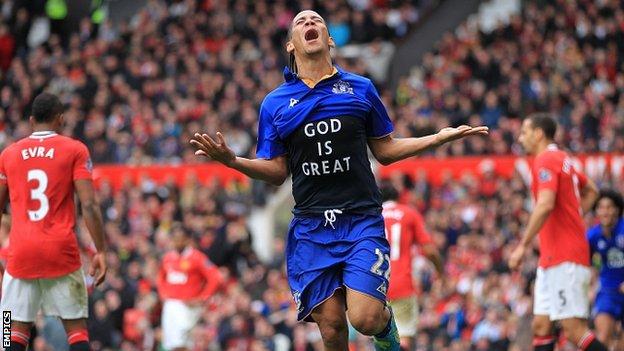 Coming after United had led 4-2, the result means Manchester City will draw level on points if they beat United at the Etihad Stadium on 30 April.

But, although Rooney was on target again following Marouane Fellaini's volley, Everton scored twice in three minutes during the closing stages, with Jelavic making it 4-3 before Pienaar had the final say.

It was a frantic second half with six goals coming after the break.

Patrice Evra struck the post from close range at 4-2, and Rio Ferdinand was denied a stoppage-time winner by Tim Howard's save.

Sir Alex Ferguson will be disappointed his team threw away their advantage after some clinical finishing by his young forwards, and the result will give an instant lift to City.

Credit must go to Everton, though, who staged a late fightback when it looked like United would be comfortable in victory.

Amid the maelstrom, Rooney collected his 33rd goal of the season, just one short of his best haul in a season, and overtook George Best and Dennis Viollet to move fourth on United's all-time goalscorers' list with his 180th goal.

But by letting the game go, Ferguson's side have now handed an advantage back to City.

Everton's point was built on a five-man midfield and early pressing, and twice they could have gone ahead before Jelavic's header.

With Nani preferred to Ashley Young on the left, the Portuguese winger helped United recover from a slow start and the hosts were just beginning to find their rhythm when Jelavic converted a looping header from Tony Hibbert's cross.

The goal meant the Croat became Everton's leading scorer, having signed in January, but it only served to spur United on and, following Tim Howard's fine save from Paul Scholes's deflected effort, Rooney rose highest to nod in Nani's left-wing centre.

Much of United's inroads in recent games have come down the right, but with left-back Sylvain Distin marshalling the influential Antonio Valencia, it was left for Nani to make an impression, and he duly obliged.

Everton were angered by United's second goal on 57 minutes when Pienaar was injured as Valencia went round him, but when the ball eventually fell to Nani on the edge of the area, he tapped it to Welbeck who jinked and curled his shot into the top corner.

Four minutes later Welbeck was the supplier, as he teed up Nani to chip over Howard.

That looked to have settled the crowd and perhaps the game, but Fellaini's volley from Hibbert's right-wing cross reduced the arrears.

United were not done, though, and Rooney added his second when he combined with Welbeck to sweep in after a clever one-two.

That finish looked like it would go a long way to helping Sir Alex Ferguson's men retain the Premier League title - but Everton had other ideas.

Jelavic took advantage of confusion between Ferdinand and Jonny Evans, before South Africa's Pienaar collected Fellaini's pass to sweep in, adding another twist to a captivating title race.