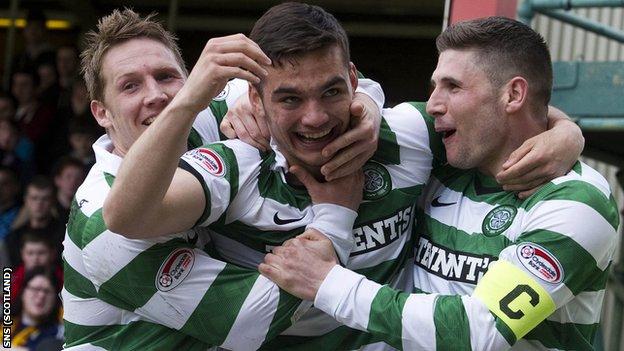 Johan Mjallby, the Celtic assistant manager, urged the club's young striker Tony Watt to stay grounded after he scored twice at Fir Park on his debut.

Watt, 18, joined Celtic's under-19 squad from Airdrie's first team in January 2011 and made quite an impact in Celtic's 3-0 win at Motherwell.

"It's a sensational debut for Tony," said Mjallby of the Celtic substitute.

"The main thing for Tony is to keep his feet on the ground and work hard in training. He'll have a great future."

Watt was introduced at the expense of misfiring Polish striker Pawel Brozek after 59 minutes of the Scottish Premier League match and within seven minutes had scored a brace.

Watt connected well with a Victor Wanyama cross to the back post and Motherwell keeper Darren Randolph could not keep the shot out.

He doubled Celtic's lead with he lashed a shot across Randolph after taking Joe Ledley's pass.

"We've had our eye on him for some time," added the Swede.

"He's a very powerful boy, a strong runner and he likes to get into the box.

"We're always going to create a lot of chances and we need strikers who are hungry for goals.

"There are a few departments where he needs to improve but he's only 18 and he's definitely in our plans for next season."

Ledley claims there is more like Watt coming through the youth system at Celtic.

"All the players and coaching staff are very pleased for him," said the Wales midfielder.

"He has a great future ahead of him, he is a goalscorer.

"He got his chance and took it with both hands so we are buzzing for him.

"And there is a lot like him. We have a good youth set-up at Celtic and that is the way forward.

"We still have Dylan [McGeouch] who wasn't in the squad but he is a great player.

"There is a lot of good future players at this club."