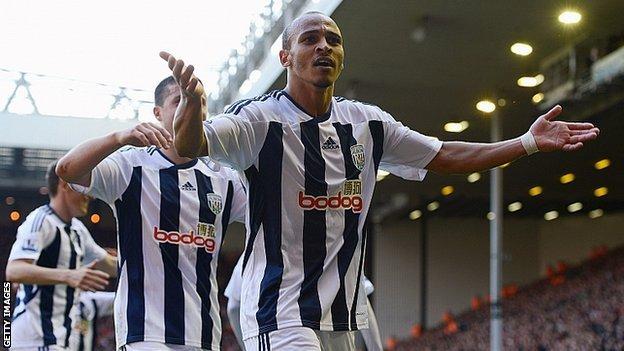 West Brom recorded their first win at Anfield since 1967 as Liverpool were made to pay for their extraordinary wastefulness in front of goal.

The Reds laid siege to the Albion goal throughout, with Jordan Henderson striking the underside of the bar and Dirk Kuyt the inside of the post.

But they were stunned on the break when Glen Johnson's error let in Nigerian international Peter Odemwingie.

Liverpool have now won only five of their 17 home league games this season.

It is a shocking return for a team of Liverpool's pedigree but once again Kenny Dalglish's team were the instigators of their own downfall as chance after chance went begging.

In total, the Reds had 28 shots to their opponent's nine, and 15 corners to the Baggies' three.

But the only statistic that will concern West Brom will be the scoreline, and their manager Roy Hodgson will take considerable pleasure from a victory over the club he managed for just 191 days before he was sacked midway through last season.

The victory moves Albion up to tenth in the table, just two places and one point behind Liverpool, who have taken only seven points from their last 10 games.

Hodgson received a warm reception from the same Liverpool fans he struggled to win over during his ill-fated spell at the club.

Liverpool made all the early running and should have taken the lead after 10 minutes when Luis Suarez threaded a pass into the path of Kuyt, who side-footed wide of the far post.

The Reds thought they should have been awarded a penalty when Maxi Rodriguez went down under contact from Billy Jones, but referee Neil Swarbrick waved away the appeals.

The onslaught continued as Maxi's cross was headed harmlessly wide by Andy Carroll, Liam Ridgewell blocked a goal-bound Suarez shot and Maxi blazed over the bar after Foster had saved from Suarez.

The Baggies had offered little threat until the 28th minute, but when their first chance came it was a clear one.

Shane Long headed Jonas Olsson's long ball into the path of Chris Brunt and his toe-poked volley drew a sharp one-handed save from Pepe Reina - the Liverpool goalkeeper proving his worth on his return from a three-match suspension.

Soon afterwards, a West Brom corner flew through a crowd of players to Ridgewell, who side-footed straight at Reina from six yards.

And there was still time for Foster to stretch out a foot to save from Daniel Agger before an entertaining first half was brought to a close.

Henderson was desperately unlucky not to put Liverpool ahead soon after the restart when his first-time shot from Carroll's lay-off struck the underside of the bar and rebounded to safety off Foster's back.

The effervescent Suarez then went close again as he worked space for a shot after a mazy run but could not keep his close-range shot below the crossbar.

Opportunities came and went as Kuyt's deflected shot from an angle cannoned back off the woodwork and Carroll twice fired over after right-wing crosses from Kuyt and Johnson picked him out.

There was no let-up as Jay Spearing's shot was cleared off the line by Brunt and Henderson's side-footed effort fizzed narrowly wide.

The ball had hardly entered the Liverpool half before West Brom landed their sucker punch on 75 minutes.

Johnson hesitated with his back to goal and was dispossessed by Mulumbu, who instantly played Odemwingie through on goal. The Nigerian kept his composure to wrong-foot Reina.

Liverpool's efforts thereafter had an air of desperation as their dismal 2012 league form continued.