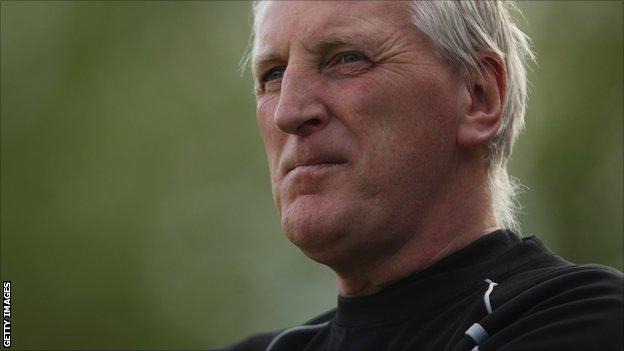 Tranmere boss Ronnie Moore has signed a new one-year contract after guiding the club to safety in League One.

Moore, 59, returned for a third spell in charge at Prenton Park in March following the departure of Les Parry, with Rovers lying 19th in the table.

Six wins in 11 matches since his arrival have lifted Tranmere to 11th.

"Everybody knows how big a part Tranmere Rovers has been in my life and I'm looking forward to the next 12 months," Moore told the club's website.

"I want Tranmere to be a top-half team next season and I'll be looking to improve the squad over the summer."

Moore, who played almost 400 games for Tranmere, added that he was pleased to have achieved his initial goal of helping the club avoid the drop.

"When I came back to Tranmere in March, I said then that I wanted to get the club to the 50-point mark before I discussed a contract," he continued.

"I'm delighted we have been able to do it with a few games to spare and even more delighted to have signed my contract.

"Now I want us to finish the season on a high and get as many points as possible in our final three matches."