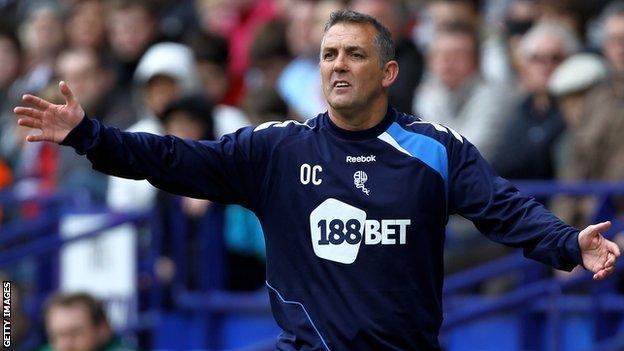 Owen Coyle says Bolton have suffered a "freak season in terms of injuries" as he prepares to give a full debut to 18-year-old Josh Vela against Aston Villa.

Coyle's problems are in midfield, where long-term absentees Stuart Holden, Lee Chung-yong and Fabrice Muamba have been joined on the sidelines by Darren Pratley and Mark Davies.

It means Coyle may turn to Vela for Tuesday's crucial clash against Villa.

"It won't faze us because he [Vela] has the ability," said Coyle.

Playmaker Davies became the club's latest injury worry when he picked up a leg injury which forced him to miss training on Monday.

Coyle remains optimistic he will be fit to play against Villa, but he will still be without Holden, Chung-yong, Mears and Muamba.

Holden is recovering from a leg injury, which has seen him play once since March 2011, while Chung-yong and Mears picked up broken legs before the start of this season.

Muamba is still waiting to see whether he can ever play for the club again after he suffered a cardiac arrest on the pitch against Tottenham last month.

"This has been a real freak season in terms of the injuries we've had, culminating in a number of other things that have happened," said Coyle.

The club have, however, received some good news after Chung-yong returned to training on Monday, while Muamba was pictured juggling a football for the first time since he was discharged from hospital.

"If and when Fabrice and his family feel that he's up for a visit [to the club] then we'll have the banners and bunting out and we'll welcome him with open arms because we'll all be delighted to see him," said Coyle.

To boost their numbers in the short-term, Bolton want Fifa to process the signing of winger Gregg Wylde as soon as possible. Free agent Wylde took voluntary redundancy from Glasgow Rangers in March after the club went into administration.

Explaining the delay, Coyle said: "For Fifa to give authorisation and clearance they want to know in their own mind it was because Rangers went into administration and Gregg was made redundant."

Bolton's game at Villa Park is one of the club's two games in hand on their Premier League relegation rivals.

They are four points behind fourth-bottom Wigan, while Villa are a further two points clear of the Latics.