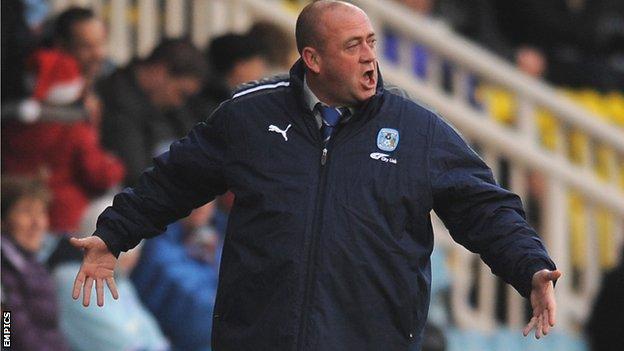 Coventry City manager Andy Thorn has called for an end to behind-the-scenes unrest that has contributed to their relegation from the Championship.

Thorn, 45, claimed key figures within the club are "at loggerheads".

He told BBC Coventry and Warwickshire: "The mentality at the whole place has not been right, I'm talking about the bickering and the stuff that goes on.

"We can't have people pulling in different directions. It's a massive thing that's stopping us move forward."

Coventry were relegated after losing at home to Doncaster, but would have gone down whatever the result as Bristol City took all three points at home to Barnsley.

The Sky Blues gave themselves hope with an unbeaten run of seven games before a 3-1 defeat at Ashton Gate all but sealed their fate.

Thorn insisted that things have not been right at the club throughout his 12-month reign.

"It's something that, since I have been in charge, I've noticed more and more," he added.

"That all needs addressing because unless everybody pulls in the same direction it's impossible to be successful."

Supporters have protested against the club's owners throughout the season, citing a lack of spending after several players, including Marlon King, Keiren Westwood, Ben Turner, Aron Gunnarsson and Lukas Jutkiewicz, left the club.

"If I'm able to get players and we do well, then the supporters are happy and everybody is happy.

"The football side of things definitely needs addressing. Everybody I speak to says they want the football club to do well, but there's always obstacles in the way for everybody.

"All that needs sorting out and I'm sure it will be," Thorn concluded.

Goalkeeper Joe Murphy, who was brought in on a free transfer from Scunthorpe United after Westwood moved to Sunderland, echoed his manager's frustrations.

"You can't lose a lot of good players, you need to replace them, you need a big squad in this division.

"Our squad was bare to start with, but it's no excuse.

"I felt through the season that we weren't one of the bottom teams in the division. The table doesn't lie, throughout the season we haven't been good enough," he said.

And defender Richard Keogh, who was sent off in the defeat against Doncaster, took a similar view.

"It's obvious for everybody to see," he said. "When you lose seven players that play in the first team, core players, then obviously you're going to be a weakened team."