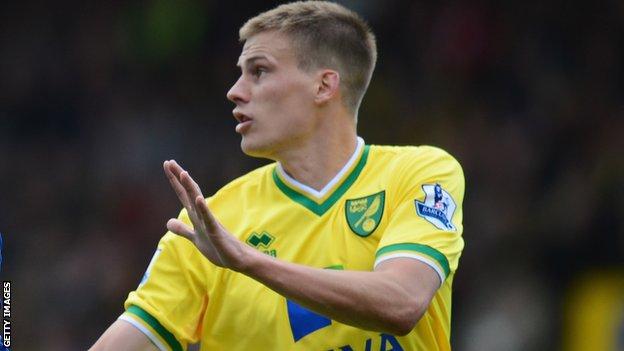 Norwich City centre-half Ryan Bennett insists the Canaries are not going to let their Premier League season end with a whimper.

Having lost their last two matches, the 22-year-old says the team are determined to finish in style.

"We want to be as high as we can in the league, the manager and the club won't let us rest on our laurels," he told BBC Radio Norfolk.

"We'll all pull-in and try and get as high as we can in the table."

Norwich's impressive return to the top flight has tailed off in recent weeks with just two wins from their last 10 games.

Bennett has played 40 games this season, the bulk of which came in the Championship, but he understands fatigue is normal at this stage of the season.

"That's no excuse, you get looked after. There's plenty of people around to make you fresh - we'll just keep going," he said.

While the club's safety is still not mathematically secure, a single point from their last three games should be enough to prevent them dropping straight back down into The Championship.

"Everyone wants to make sure they're in the team, we'll keep digging in and try to prove our worth and see what happens," he said.