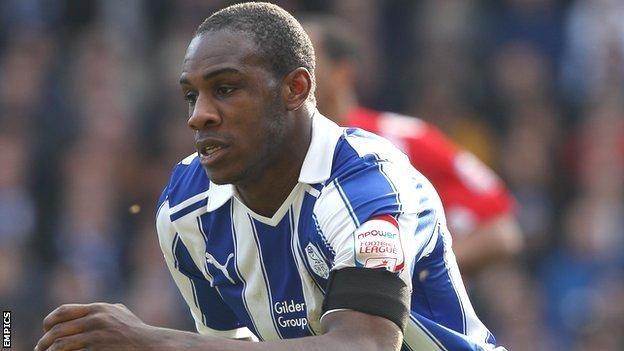 Sheffield Wednesday midfielder Michail Antonio says the promotion race between the two Sheffield clubs is exciting for the players as well as the fans.

The 22-year-old scored a last-minute winner against Carlisle on Saturday to help the Owls close to within a point of the Blades, who lost at MK Dons.

He told BBC Radio Sheffield: "It's exciting to participate in. In football you can never predict anything.

"We just have to focus on us and win our last two games."

He added: "We go to Brentford on Saturday and that's a tough game but they've got Stevenage at home and they're a very good side.

Wednesday are the fourth club Reading man Antonio has been loaned to in the last four seasons. He has previously enjoyed stints with Cheltenham, Southampton and Colchester.

"If they win their games then we've tried our hardest and we'll take our momentum into the play-offs and hopefully do it that way."

The winger, who is on loan from Reading, injured his shoulder during the victory over the Cumbrians but stayed on the pitch to score the crucial last-gasp winner.

He admitted that scoring the goal to give his side a much-needed win made playing through the pain worthwhile.

"It bothered me a lot, I was just trying my best to get through the game and I'm just hopeful I can get it right for next week," he continued.

"But it was good to score a goal to win the game and we need every point we can get and it was lovely to get the win like that.

"Scoring at Wembley's probably the highlight of my young career but that's definitely up there."