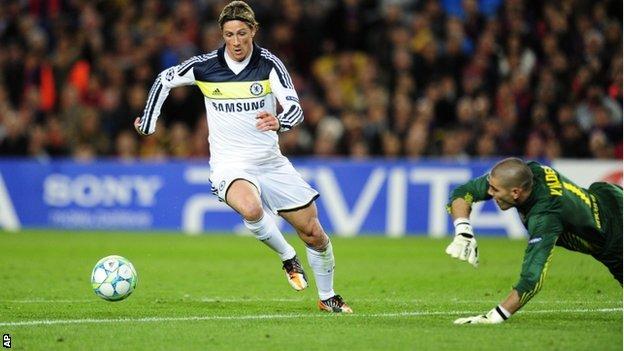 Chelsea reached the Champions League final despite John Terry's sending off to seal a truly remarkable two-legged victory over Barcelona.

The Blues were in serious trouble after goals from Sergio Busquets and Andres Iniesta put Barca ahead either side of Terry's dismissal for violent conduct.

But Ramires strode forward to chip Chelsea ahead on away goals.

Lionel Messi hit the bar with a penalty for Barca before Fernando Torres ran clear to seal the tie in injury time.

Earlier in the week, Torres had said "the best team does not always win". His words were prophetic for England's last men standing in Europe as they scrapped their way past the defending champions and into the final in Munich on 19 May.

That it was Torres who scored the goal after being so maligned during his time at Stamford Bridge made for the perfect ending to a famous night for Roberto di Matteo's side.

Indeed, the whole game turned expectation on its head. Barcelona had scored 102 goals at the Nou Camp this season and scored 18 goals in their last five Champions League home games.

However, Chelsea's last three visits to the Nou Camp had each ended in draws, while Real Madrid beat Barcelona on Saturday, and the Blues were leading 1-0 from the first leg after Didier Drogba's winner.

Incredibly, all three of Chelsea's goals in the tie were scored in time added on, while Barcelona enjoyed 72% of possession in both legs.

The Blues' challenge had been rocking at that point, with Terry's centre-back partner Gary Cahill lost to injury and Barca having just levelled the tie through Busquets's neat, close-range finish from Isaac Cuenca's pull-back.

Within five minutes, the true cost of Terry's indiscretion seemed clear as Iniesta collected from Messi in the box and swept the home side into the lead.

However, Chelsea raised themselves for a final salvo of the half, as Frank Lampard's through-ball gave Ramires an opportunity he did not waste, chipping Victor Valdes from 15 yards.

Blue is the colour

Chelsea's joy looked likely to be short-lived, however. The second half had barely begun when Barca were given the chance to take hold of the tie again, Drogba tripping Cesc Fabregas in the box.

Messi has scored 14 goals in the Champions League this season - and 63 in all competitions - but he struck his spot-kick against the bar.

It was a let-off for Chelsea, but one they seized upon and their rearguard action in the remainder of the second half was stunning.

Barca had their chances, Cuenca seeing an effort saved by Petr Cech and Messi striking a post from 22 yards.

In stoppage time, substitute Torres ran clear and rounded Valdes before slotting in to set up a showdown with either former Chelsea boss Jose Mourinho's Real Madrid - or the side whose ground hosts the final, Bayern Munich.

The only sour note for the London side is that suspensions means they will have to do without Ramires, Terry, Branislav Ivanovic and Raul Meireles in Munich.