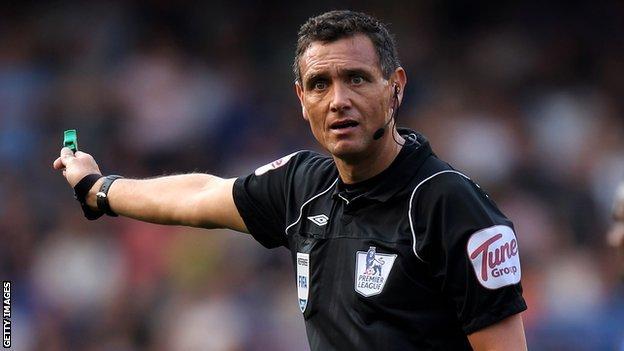 Andre Marriner has been named as referee for the Manchester City-Manchester United match on 30 April.

United boss Sir Alex Ferguson says it will he a as the Premier League title hangs in the balance.

City trail their local rivals by three points but have better goal difference.

Marriner, from Sheldon in the West Midlands, has refereed United three times this season - at Norwich,Liverpool and Bolton - but has yet to take charge of a City match.

His only previous Manchester derby was the game in February 2011 when Wayne Rooney sealed a 2-1 victory for United with a spectacular overhead kick at Old Trafford.

Ferguson was critical of Marriner after his side lost 2-0 to Liverpool at Anfield in September 2009, claiming he struggled to deal with the intimidating atmosphere.

"There were so many controversial things that happened we have to feel aggrieved at some of them," he said.

Marriner has issued five red cards this season, including one for Blackburn's David Dunn in the Lancashire derby with Wigan at the DW Stadium in November, when he allowed a goal for the visitors to stand after Morten Gamst Pedersen had apparently taken a corner to himself.

City will go top with two games of the season left if they win the derby at Etihad Stadium.

They surged back into the title race at the weekend, beating Wolves 2-0 while United were held to a 4-4 draw by Everton.