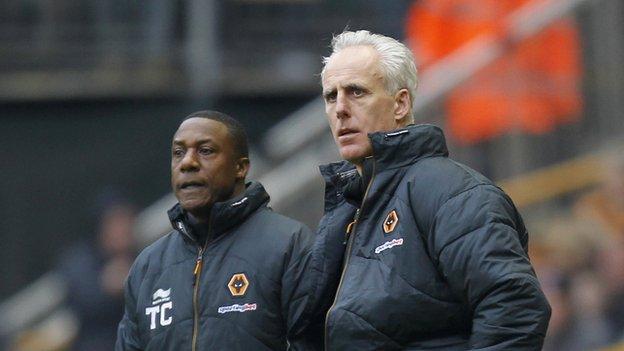 Connor has failed to win any of his 10 games in charge, and Wolves were relegated on Sunday.

"An experienced manager agreed to come and then had a change of heart," Moxey told BBC Radio 5 live.

"Terry took the job because we felt he was then the best man of the small number of candidates available."

Wolves interviewed other candidates, believed to include Alan Curbishley, before appointing the inexperienced Connor.

Moxey said: "Had that manager been appointed, the process we followed in February would have been a textbook process and everyone would have said Wolverhampton Wanderers couldn't have dealt with that better.

Moxey also believes it was right not to line up a replacement for McCarthy before his dismissal.

"We are a loyal organisation who like to do things properly and professionally," he said.

Moxey confirmed the managerial position and the future of the Wolves players will now be discussed after the end of the season.

"We need to address the manager situation at the end of the season," he said.

"Once we have a permanent manager in place we will then address the issue of the squad. It needs changing and freshening up."