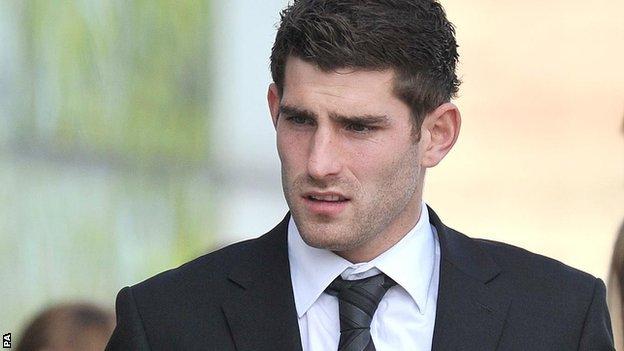 Evans was confirmed in the team, which was voted for by players last month, days after he was

Taylor said: "That was a football judgement by his fellow professionals, it was not a moral judgement.

"If he had been removed, it would have created more of a storm."

Wales international Evans has scored 35 goals in 42 games for the promotion-chasing Blades this season but is now facing five years in jail.

Taylor said the PFA would have been "manipulating the vote" had it decided not to include Evans, 23, in the League One line-up.

"Obviously everyone is quite disturbed about the conviction and whether that would have changed the vote we just don't know," said Taylor. "In no way does the PFA condone the offence for which he was convicted."

PFA chairman Clarke Carlisle backed Taylor's assessment of the situation and revealed that discussions had taken place before the team announcements were confirmed.

The Northampton Town defender wrote on Twitter: "It was a democratic vote on professional ability, not a moral decision.

"Some things in life are a shade of grey. Separating professional and personal behaviour is one of them. It was (and is) a very tough and delicate stand point!"

Clarke said the PFA would "address" the issue and listen to the views of fans. He was also aware that Evans could yet appeal the verdict.

"This is another pertinent factor," added Clarke, "and one we must be legally and professionally mindful of."