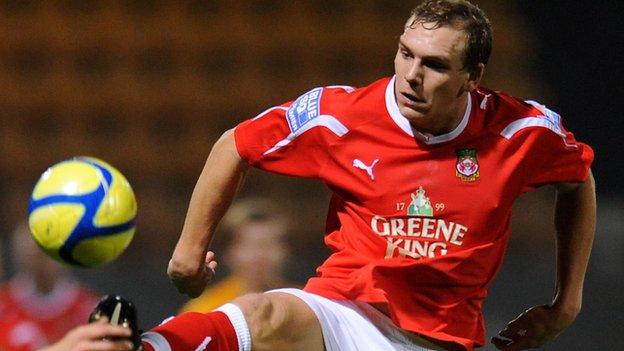 Wrexham travel to Welsh rivals Newport on Tuesday and host Braintree on Saturday before the play-offs begin.

Andy Morrell's side have not won in their last five league games but have secured second spot in the table.

"It's a big game for us to get another three points and get some momentum going into the play-offs," said Wright.

"Everyone's got to know their jobs now and take that into the next two games to see the season out. That would give us confidence for the play-offs."

"When Fleetwood won the title and we guaranteed second it's hard to keep your mind focused on the job at hand," he said.

"When you've got something to play for there's a big of edge about you. It takes a little bit of edge off it when you know where you are going to finish in the league.

"Maybe that's what has happened over the last couple of weeks. We know what we've got to do now to go into the play-offs."

Should Morrell's side win over two legs in the Conference play-offs, they will play in the final at Wembley on 20 May.

But Wright says Wrexham cannot think about playing at the home of English football ahead of the two-legged play-off semi-finals.

"Obviously you think about it," said Wright of the prospect of playing at Wembley.

"You're so close but you're miles away from it as well. I think every player has thought about it but you can't let it affect you."