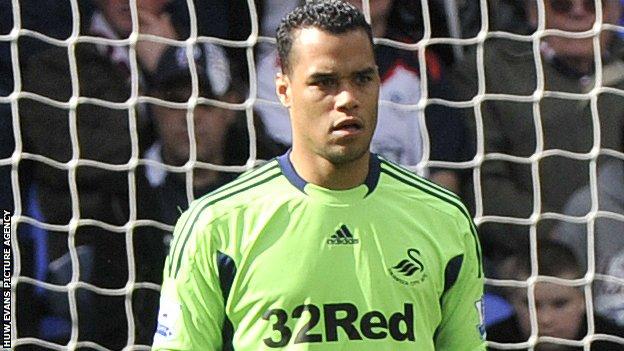 Goalkeeper Michel Vorm has said he is happy to stay at Swansea City beyond the current season.

The Dutch international has been among Swansea's star performers during their debut season in the Premier League.

The 28-year-old joined Swansea from FC Utrecht for around £1.5million last August and has kept 13 clean sheets.

"You never know what happens but I don't really think that I'm going to leave the club in the summer," said Vorm.

"My family loves it here. I cannot imagine that I'll leave the club after one season especially after the way we've performed.

"You never know what happens of course but I'm very happy here."

In January, the Swans denied they had received enquiries from other clubs for the Dutch goalkeeper after their Dutch-based director, John van Zweden, had claimed Manchester United and Chelsea had been in contact

Vorm, who has been capped nine times by the Netherlands, has played in all but one of Swansea's games in the Premier League this season.

And he told BBC Radio Wales Sport: "For me it was a dream come true signing for Swansea to play in the Premier League.

"For me it was very easy to fit in. The style suits me. Brendan Rodgers for me is easy to work with. He's very clear the way he sees things.

"We've played some great matches, especially at home. The whole season through has been fantastic.

"I had this feeling we can progress especially after the beginning of 2012 [when] we also got away points and getting better and better.

"We learn every match and I think everybody can see what we're capable of."