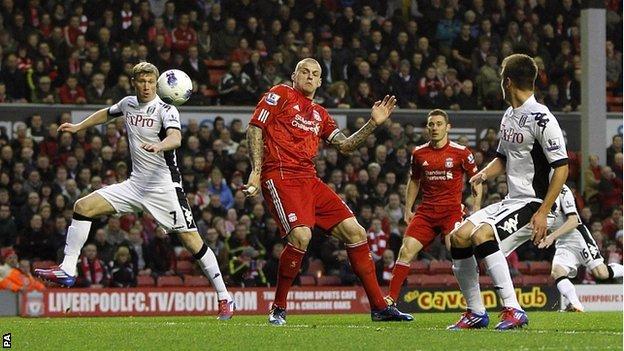 Martin Skrtel's own goal earned Fulham their first win at Anfield as Liverpool warmed up for the FA Cup final in the worst possible fashion.

In a much-changed side, Liverpool were flat throughout and went behind when Skrtel turned in following John Arne Riise's cross after five minutes.

Andy Carroll's header was saved and Brede Hangeland cleared off the line.

But Kerim Frei hit the post and Clint Dempsey should have scored only to be denied by Reds keeper Alexander Doni.

In a tepid encounter, Liverpool failed to carry on the momentum gained by a 3-0 victory at Norwich last Saturday.

And the defeat continued a poor run which means Kenny Dalglish's side have only won three Premier League games in their last 13.

Liverpool have still only won five league games at Anfield this season while Fulham, who recovered from a 4-0 defeat by Everton last weekend, move level with their hosts on 49 points.

There is also now the danger that the Reds could finish out side the top eight for the first time since 1954, when they were relegated.

With nine changes to the team that beat Norwich on Saturday, it was clear where Dalglish's priorities lay.

Yet having asked his team to prove themselves ahead of the Wembley trip to face Chelsea, they were as subdued as the Anfield atmosphere in the first period.

Before this game, Fulham had never won in 41 top-flight league visits to Merseyside to play either Liverpool or Everton

Following Skrtel's unfortunate opener, Pavel Pogrebnyak could have made it a nightmare cup final rehearsal, but the Russian could not find enough power to beat Doni from Dempsey's chipped pass.

It took until half-way through the first period before the hosts had a meaningful effort, with Dirk Kuyt firing wide.

Indeed, it was Fulham's Alex Kacaniklic, a former Liverpool academy player, who looked the most dangerous player as Fulham continued to probe.

Both Liverpool's top scorer this season, Luis Suarez, and skipper Steven Gerrard were given the night off and as wise it may have appeared to omit the pair, the wholesale changes checked any optimism surrounding the club.

Mark Schwarzer almost gifted Liverpool an equaliser, but Hangeland cleared Jonjo Shelvey's shot off the line, and Carroll had a header saved.

But once Hangeland again saved Fulham's skin by tackling Maxi Rodriguez as he shaped to shoot, the visitors were in the ascendancy after the break.

Having been battered across Stanley Park at Goodison last weekend, Fulham were again without manager Martin Jol because of a chest infection, but they almost doubled their lead when Frei cut in from the right and smacked a shot against the post.

The introduction of 17-year-old Raheem Sterling drew a loud cheer from the Anfield crowd, which summed up the mood inside the stadium.

And it almost turned sour when Frei put Dempsey clean through on the edge of the area, but the American's shot was well saved.

Still, this was hardly a perfect appetiser for Wembley and the performance did little to lift the gloom surrounding Anfield this season.