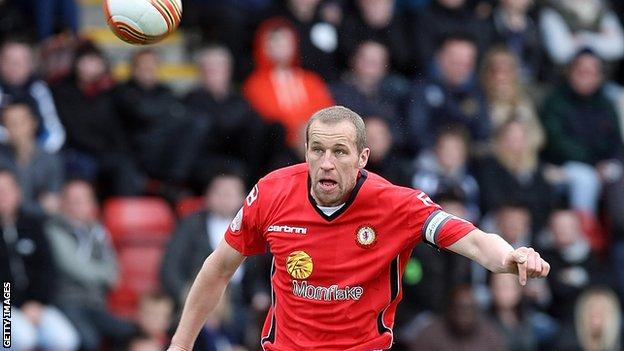 But top scorer Nick Powell is a doubt, having not trained this week as he struggles to overcome a bout of tonsilitis which kept him out of last weekend's 1-0 home win over Cheltenham.

"They both want to play. We must assess if they'll get through the game."

If Powell fails to make it for a second game in a row, that would mean another chance for Shaun Miller, without a goal since September.

As for Artell, he injured his hamstring scoring last Saturday's acrobatic winner against Cheltenham. But, if he fails to make it, Carl Martin is fully fit again and could earn a recall.

Whoever Davis picks, the one sure aspect of Saturday's game is that the Alex will head to Devon as League Two's form team, having enjoyed a 14-game unbeaten run to make a timely entry into the League Two play-off zone with just two games left.

"Nobody will want to play us on the run that we're on," Artell told BBC Radio Stoke. "And we're doing it at a good time. We are a good side, and we're seventh on merit."

If we win at Torquay and against Aldershot, we're in the play-offs

After losing 10 of their first 17 League Two games this season, which led to Davis taking over from Dario Gradi in November, Artell insists that it makes being in play-off contention at this crucial stage of the campaign even more of an achievement.

"We've played a 30-game season rather than a 44-game season, given the start we had," he points out. "And to be where we are is credit to everybody at the club."

If they get a result at Plainmoor against a Torquay side still chasing automatic promotion, the Alex then host Aldershot on the last day of the season - and Artell says the key now is that their fate is now all in their own hands.

"Hopefully, with two more positive results, we'll stay in there," he said. "But we don't have to rely on anyone else.

"If we win at Torquay and against Aldershot, we're in the play-offs."

Artell is familiar with the positive mood around the Crewe camp, the much-travelled former Rotherham, Shrewsbury, Mansfield and Chester stopper having been involved in Morecambe's 2009-10 promotion push.

The Shrimps won eight of their last 11 games to finish fourth, only to then lose heavily to Dagenham & Redbridge in the play-off semi final.

"Two years ago when I was at Morecambe it had the same feeling about it," he added.

"We came from nowhere to finish fourth, and everybody thought 'Morecambe? They're not a good side.

"But, with Crewe and their history and their reputation in the game, they might not be saying that."