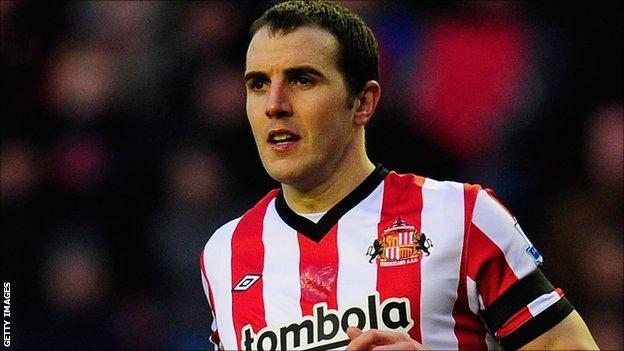 Sunderland defender John O'Shea has called on the players not to let their improvement under Martin O'Neill fall away at the end of the season.

After losing only four fixtures in 20 following the Northern Irishman's appointment as manager, the club has won only two of their last 10 games.

"We're letting the season tail off after a fantastic run," the Republic of Ireland defender told BBC Newcastle.

"We've got to make sure we finish strongly, it's an unforgiving league."

If O'Neill is considering coming out of retirement because he thinks he can get 15 goals, then it shows we're putting good balls in the box

O'Shea added: "We need to finish top half."

Scoring has also recently been a problem for the Black Cats, with no goals in their last four matches.

Stalemates with Wolverhampton Wanderers and Aston Villa have added to the frustration at the Stadium of Light, notably at Villa Park where Nicklas Bendtner had a second-half strike chalked off for offside.

"We had lots of very good chances, and if the manager is considering coming out of retirement because he thinks he can get 15 goals, then it shows we're putting good balls in the box," O'Shea added.

"It's frustrating because we have had two games that we should have won, and that's where we have to get more clinical.

"If we hadn't been creating chances then it would have been disappointing, so we've got to keep that going and one will fall in off the back of someone's head or backside.

"We had been scoring plenty of goals, causing teams problems but the last few games it hasn't happened for us."