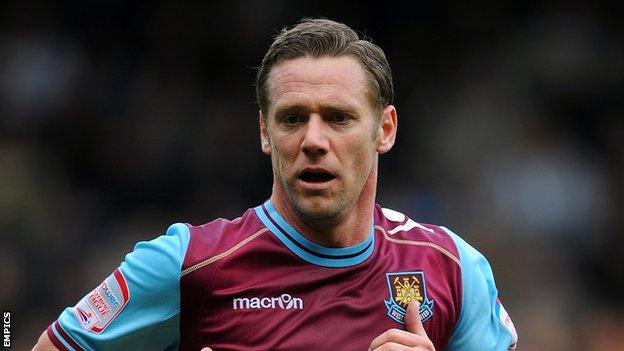 West Ham captain Kevin Nolan hopes relegated Coventry can do his side a favour in the automatic promotion race.

The Hammers must beat Hull and hope Southampton drop points at home to the Sky Blues to have a chance of finishing in second place in the Championship.

The 29-year-old told BBC London 94.9: "The main thing for us was to take it to the final day. We are asking Coventry to do us a massive favour.

"We're really hoping Coventry go there and give them a good game."

After beating Leicester 2-1 on Monday, West Ham are now two points behind Southampton in the table.

A win for West Ham coupled with a defeat for Saints on Saturday would seal an immediate return to the top flight.

If the Saints draw, West Ham would need to win by a margin of three or four goals - depending on how many Southampton score - to clinch promotion.

"It's going to be tough on Southampton," Nolan added.

"Hopefully when they put that shirt on on Saturday it'll be a little bit heavier as there are expectations on them to win the game. Hopefully Coventry will give us something to play for.

"The main thing is making sure we win our game.

"No matter what happens, we've got momentum going into the end of the season and maybe into the play-offs."

Irons boss Sam Allardyce added: "I'm fearing I'll have to tell the players to go out and win 3-0 or 4-0 and hope Southampton slip up.

"We might need that margin because we'd be absolutely gutted if Southampton end up drawing, we don't score enough goals and end up staying in the play-offs on goal difference."