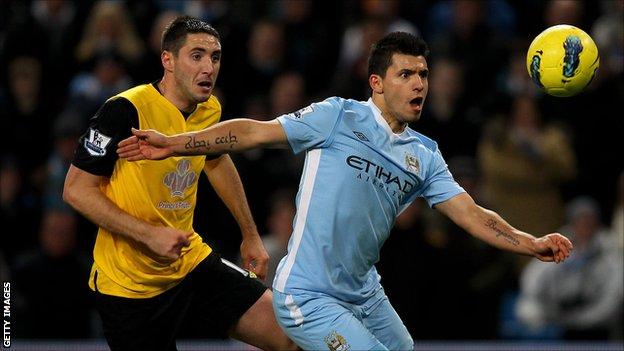 Bradley Orr believes the character and fighting spirit within the Blackburn Rovers squad will be enough to save the club from relegation.

Steve Kean's side are third from bottom in the table, three points from safety with three matches left to play.

"The dressing room is full of spirit," Orr told BBC Radio Lancashire. "In times like this, it's what you need.

"You need a group that's pulling in the right direction and the Norwich game showed that we've got that."

Blackburn's 2-0 win against the Canaries at Ewood Park on Saturday kept Rovers in touch with the teams around them at the foot of the table.

Bolton, Wigan, QPR and Aston Villa are the other sides hoping to avoid joining already-relegated Wolves in the Championship next season.

Blackburn go to Tottenham on Sunday and Chelsea on the final day of the campaign, with a potentially crucial home game against Wigan sandwiched in between.

The former Bristol City and QPR man continued: "We've got three games to make sure that we're absolutely safe.

"We've got to keep doing what we're doing, in terms of our battling qualities and producing those moments of magic when they're needed.

"We need to embrace the pressure and enjoy it. In a strange way, you've got to enjoy that pressure rather than let it affect you.

"Hopefully that's the mentality and attitude that we can possess in the next three games."

Gael Givet was restored to the starting line-up for the win against Norwich and Orr believes his return could prove to be pivotal to Blackburn's survival hopes.

"Gael's a warrior," said Orr. "He puts his body on the line and leads by example.

"Without being a big talker on the pitch, he's a captain in the way he goes about his job."