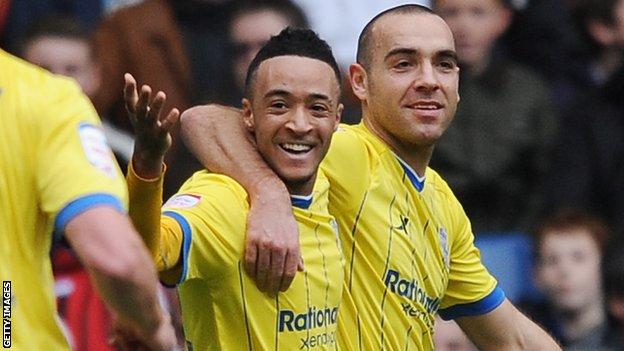 "All the staff have been really good," he told BBC WM. "As a young lad, I can't really ask for anything more.

"I'm involved with the first team week in, week out. It's all about developing me and the gaffer has helped me a lot."

He has featured on both flanks at St Andrew's in his debut season, but has been encouraged to exploit the space behind the main striker in recent months.

"If I can adapt to playing in the hole it gives me a variety of positions," he added.

"Chris Hughton tells me to get on the ball and play. I haven't been playing out wide in training. I've been playing in the hole and getting the ball.

"The gaffer always encourages me to play. It adds a bit of variety to my game."

After playing the full match in the FA Cup fifth round replay against Chelsea on his 18th birthday in March, Redmond then made just a handful of late substitute appearances until being brought on during the first half of Saturday's draw with Brighton.

"I played against Chelsea on my birthday in the FA Cup and it was a dream come true, an extra present," he said.

"After then, I think I went six weeks without really getting involved.

"But there was always going to be ups and downs in the season and he let me know that from the off.

"He said to stay hungry and I was always hungry in training. I had always been one of the best in training."

With Blues now assured of a play-off place, Redmond is keen to be involved in any way possible.

"I'm ready to do whatever," he said, "whether it's a start or coming on.

"Even if it's coming on in the last five minutes just to do a defensive job, I'm going to be up for it.

"If I'm in the gaffer's thoughts from now on then so be it, but I'll just carry on with my normal routine."