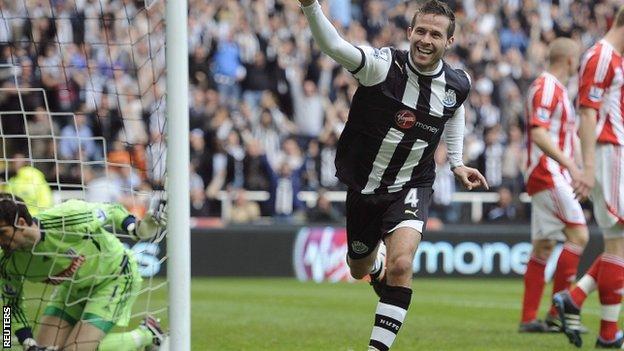 Midfielder Yohan Cabaye admits he is surprised that Newcastle are currently in a position to challenge for a Champions League place.

The 26-year-old France international, signed from Lille last summer for around £4m, has helped the Magpies to a top-six spot this season.

"I think we're overachieving if you take into account the objectives we set ourselves at the start of the season."

He added: "Qualifying for Europe will be fantastic for this club and fully deserved, but with just three games left we will just have to wait and see where it takes us.

"Look at Chelsea, they have reached the Champions League final against the odds and that is a fantastic achievement.

"I'm sure Newcastle will be looking to build on this season and maybe try to add to the squad, but of course that is for the chairman and the manager to decide."

I didn't come here with a negative attitude asking myself: 'Is it going to go well?'

Cabaye has already played in European club football's premier competition and, having helped Lille achieve the league and cup double last season, he had another opportunity to ply his trade against the best.

But Pardew and his scouting department, including chief scout Graham Carr, brought the diminutive player to Tyneside.

Cabaye's influence in the team has grown as the season has progressed and he had arguably his best game in a Newcastle shirt during the recent 3-0 win over Stoke.

Although they lost their following game to Wigan, his side are set for their best finish in the top-flight since the 2003-04 season, when they finished fifth.

"I didn't come here with a negative attitude, asking myself: 'Is it going to go well?'," added Newcastle's number four, who played with Eden Hazard and Arsenal's Gervinho at Lille.

He is one of several French-speaking players at the club who have joined in the last two seasons, and says those factors have helped him settle in the north east of England.

Cabaye also believes playing in the Premier League over the past season has helped him become a better player.

He is strongly fancied to be selected in the France squad for Euro 2012, having impressed for the national side in the victory in Germany in February.

"This league is totally different, there are no easy matches," he added.

"You have to always concentrate because as soon [as] the ball goes out of play it comes back into play just as quickly. The rhythm is more intense, it's harder work.

"That intensity has helped me all season and allowed me to be stronger and tougher mentally. It's also helped me at international level."