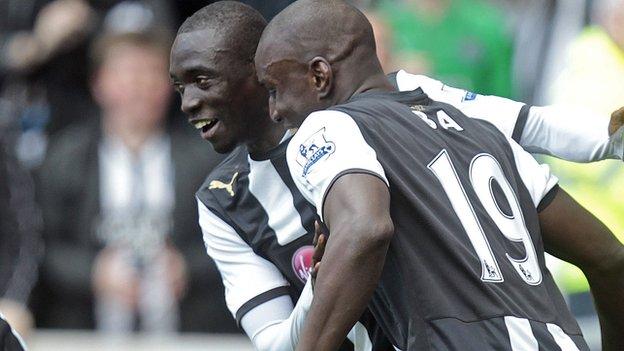 Senegal Football President Augustien Senghor has insisted the duo will be selected in the African nation's squad for the tournament.

After the draw, Senghor said: "They are patriotic guys and if the nation needs them, they will come."

Ba and Cisse have been the stars of Newcastle's unexpected push for a Champions League spot this season.

Cisse has scored 11 goals in ten games since signing from SC Freiburg in January, while his strike partner Ba has 16 goals following his free transfer in the summer after a stint at West Ham.

"We need top scorers like Papiss Cisse,'' Senghor added. "When we have these kind of players it would be a mistake to leave them at home."

"For the fans of the first match, it will be a good thing if they play against Team GB. It will create a focus for a lot of people around this match.''

Senghor also confirmed the Senegal FA's accounts have been frozen as a result of legal action by former coach Amara Traore.

The Senegalese is waiting for around £44,000 in unpaid wages following his sacking in February.

He said: "With this blocking of our accounts, we cannot run properly, we can't do anything, pay any outstanding cheques or make any financial transactions. The effects could last for months."