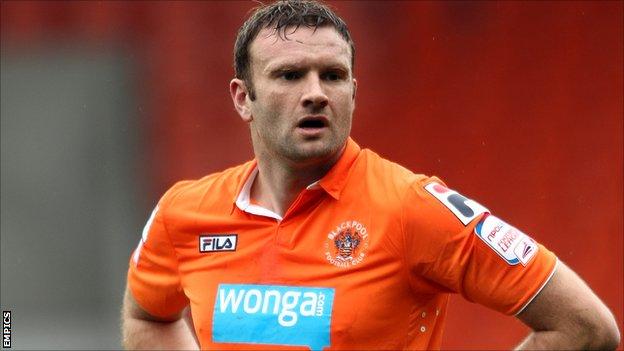 Ian Evatt believes Blackpool are the in-form team heading into the Championship play-offs.

Ian Holloway's side guaranteed their spot in the top six with a 4-0 home win over Burnley on Saturday.

"It's a phenomenal achievement to get there again, but it's only half the job done," the 30-year-old defender told BBC Radio Lancashire.

"We've got a long way to go yet, but we've got momentum and we are going to take some stopping."

The former Derby and QPR man added: "We've kept five clean sheets out of six and the one goal we conceded (in a 1-1 draw at Barnsley) was a total fluke.

"If we can keep clean sheets, our forward players will always score because when they're at it, they're hard to stop."

Evatt was part of the Blackpool team that won promotion to the Premier League via the play-offs in 2010 and goalkeeper Matt Gilks, who also started in the 3-2 victory over Cardiff at Wembley, believes the squad will be able to draw on their past experiences.

"We've got a history in these play-offs," said Gilks. "I don't think any team, whoever it may be, will want to come here and face us, with our dogged determination and our ability to finish teams off."

Blackpool and Birmingham have both guaranteed their play-off slots, regardless of their results on the final day of the season.

The loser in the race for the second automatic promotion spot, either Southampton or West Ham, will also be involved, while Cardiff or Middlesbrough will complete the quartet.