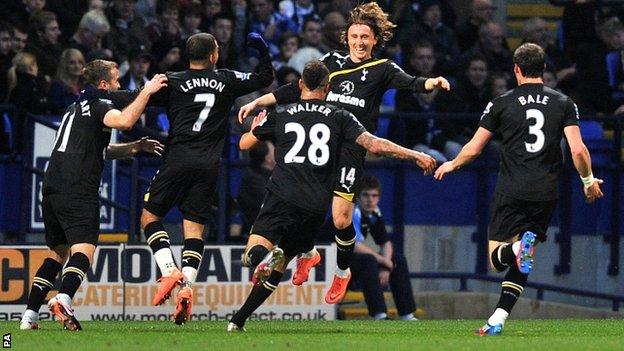 Tottenham won back-to-back league games for the first time since January as they reinvigorated their Champions League hopes by beating Bolton.

On the day since he suffered a cardiac arrest when these two teams met in the FA Cup in March, Spurs produced a ruthless display of finishing to keep them fourth in the Premier League.

Luka Modric gave the visitors the lead with a clinical strike following a corner, despite Sandro appearing to handle the ball before the set-piece was awarded.

And although Nigel Reo-Coker's equaliser roused the home supporters after the break, three goals in the space of nine minutes put the game beyond Bolton, who remain in the relegation zone.

Rafael van der Vaart and Emmanuel Adebayor both scored on the counter-attack, with the Togolese earning Harry Redknapp's side their first away win in nine league games.

The upturn in Spurs' fortunes has coincided with Redknapp's links with the England job coming to an end and he will be delighted that the season still has hope after a demoralising period.

But, for his Bolton counterpart Owen Coyle, any thoughts of easing his team's relegation worries disappeared once Tottenham punctured an early second-half revival.

The Trotters remain in the bottom three despite being level on points with QPR and will have to regroup for a vital game with West Bromwich Albion on Sunday.

Coyle had asked the supporters to raise the roof in the build-up to this fixture and it felt like they almost had, such was the incredible reception towards Muamba before kick-off.

Both Bolton and Spurs fans cheered as he greeted the crowd following his miraculous recovery from a cardiac arrest during the FA Cup tie between these two teams on 17 March.

But his presence could not inspire the hosts in the first period, as Tottenham took control of the midfield, with Modric the hub of their inspiration and creativity.

Bolton were far less fluid, although both David Ngog and Dedryck Boyata were close to scoring at the back post, but when Spurs took the lead it was a strike to savour.

Van der Vaart clipped a corner to Modric 25 yards out and the Croat smacked it into the top corner, leaving keeper Adam Bogdan with no chance.

Bolton had reason to feel aggrieved, however, as it appeared that Sandro handled the ball in the build-up to the set-piece.

For the home side this was a game in hand on their relegation rivals and they finally took advantage of that opportunity after the break when, from a throw-in, Reo-Coker tucked in Ngog's clever flick.

The Reebok erupted and as Bolton took a hold of the game for the first time, Chris Eagles almost gave them a lead.

But two goals in two minutes burst that optimism. Tottenham countered down the left and Van der Vaart met Bale's cross, before a delicious Modric pass picked out Lennon, who surged down the right to square for Adebayor.

The forward then rounded Bogdan after Bale's cute pass and, although Martin Petrov tested Brad Friedel from a tight angle, Bolton were smarting.

Coyle's team have two games against West Brom and Stoke to try to lift their spirits and remain in the Premier League, while Spurs have arrested a slump in form at a vital moment to stay ahead of Newcastle and Chelsea.

"We got more than back in game, we were in the ascendancy and looked like we could go on and win the game. But we lost soft goals, it was self-inflicted and that's the disappointing thing.

"It was a wonder goal from Modric but before the corner it should have been a hand ball. Sandro punched it but the referee did not see it.

"We came roaring back but we were guilty of poor defending. That's when you need to stand up and be counted and weren't.

"We need to dust ourselves down and go and get three points against West Brom on Sunday."