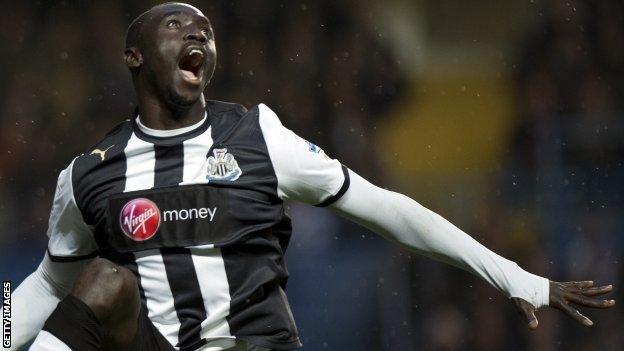 Papiss Cisse produced two goals of the highest quality to keep Newcastle United firmly in contention for a place in the Premier League's top four with victory at Chelsea.

Cisse took his tally to 13 goals in 12 games with spectacular strikes in each half to leave Chelsea looking increasingly likely to have to win the Champions League final against Bayern Munich later this month to reach next season's competition.

Senegal striker Cisse, a £10m buy from Freiburg in January, had already demonstrated his class with a flick and left-foot volley that flew high beyond Chelsea keeper Petr Cech after 19 minutes.

He topped that brilliantly as the game moved into 10 minutes of stoppage time resulting from a lengthy delay when Newcastle's Cheick Tiote was taken off on a stretcher with a head injury sustained in an aerial clash with Chelsea midfielder Jon Obi Mikel.

Cisse was wide on the left flank when substitute Shola Ameobi touched a throw into his path. He instinctively struck a swerving, angled shot with the outside of his right foot that curved viciously before landing in the top corner beyond the retreating, helpless Cech.

Newcastle manager Alan Pardew celebrated with a mixture of disbelief and delight on the touchline as his team's remarkable season hit another high.

They are now level on points with Spurs, who are ahead in fourth place thanks to a superior goal difference after their 4-1 win at Bolton, and Newcastle's meeting with leaders Manchester City at the Sports Direct Arena on Sunday is now an even more mouth-watering prospect.

Chelsea's interim manager Roberto di Matteo shuffled his side ahead of Saturday's FA Cup final with Liverpool at Wembley and also after a heavy schedule in which they also secured a place in the Champions League final.

Frank Lampard, Ashley Cole, Juan Mata and Didier Drogba were left on the bench, but this was still a jaded Chelsea display and they are now four points off the Champions League places with only two games left.

Drogba's love of Wembley makes him favourite to start ahead of Fernando Torres but the Spaniard was in determined mood as he tried to force his way into contention to face his former club.

He was Chelsea's liveliest performer as they faded after a bright start, with Newcastle taking control in impressive fashion towards the latter stages of the first half.

By this time they were already ahead, courtesy of another top-class finish from the prolific Cisse. Davide Santon found the striker in space on the edge of the area and he teed himself up with a first touch before flashing a finish high past Cech.

Chelsea, perhaps understandably given their recent exertions, looked heavy-legged but could have levelled when Florent Malouda could only direct Torres' cross wide and Branislav Ivanovic headed Raul Meireles' corner off target at the far post.

Newcastle actually came closest to adding a second on the stroke of half-time when Demba Ba, who had passed 1,000 minutes with a goal, struck the bar from the edge of the area with Cech beaten.

Di Matteo introduced fresh impetus at the restart by sending on Mata for Daniel Sturridge but Chelsea continued to struggle to land any blows on this resilient Newcastle side.

The Magpies suffered a blow midway through the half when Tiote, who had been involved in a clash with Mikel moments earlier, was floored after an aerial clash with the same player. There was a delay of around seven minutes as the Ivorian was placed carefully on a stretcher.

During the break in play Chelsea brought on Drogba for Malouda and it was not long before Lampard was also in the action as replacement for Meireles.

Newcastle were fiercely disciplined and well organised, as proved when Santon was perfectly placed on the far post to direct John Terry's 87th-minute header off the line.

Chelsea's hopes were lifted by that length spell of added time, but they were dashed by that moment of magic from Cisse that ensures Newcastle's dream lives on.

The Magpies' last two games are at home to title-chasing City and away to Everton on the final day. Chelsea face Liverpool and Blackburn as well as their two cup finals.