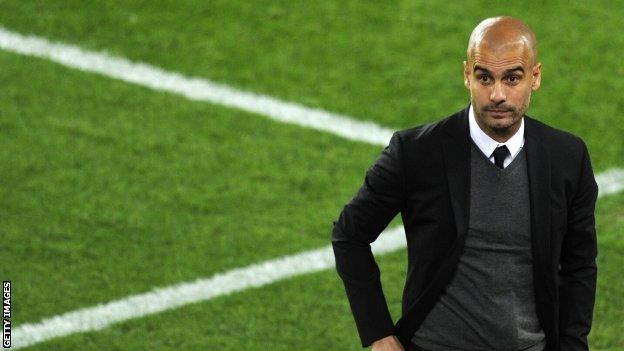 Barcelona manager Pep Guardiola says the Champions League semi-final defeat by Chelsea may force his side to change their tactics, but insists they played "exceptionally well" in defeat.

"Maybe it's a lesson for the future? We have to find the way to attack better."

The 41-year-old said he would decide whether to renew his Barcelona contract in "the next few days".

He added: "We'll talk about everything and then take a decision because it's evident that it's time to."

Guardiola has had a series of one-year contracts at the Nou Camp since first taking up the reins in 2008 and had been linked with the Chelsea job in the wake of Andre Villas-Boas's departure from Stamford Bridge in March.

The view from Spain

While he could not fault his players' effort in the loss to Chelsea over the two legs, he conceded that he might need to find more variation to their play.

"The first thing that crosses my mind is huge sadness. I think we played exceptionally well," he said.

"I try to figure out what to say when looking at the team, about what we did wrong to not reach the final and I can't think of anything.

"The opposition was always there, very defensive and good on the counter-attack.

"We did everything we could but we couldn't score another goal and football is about scoring."

Barcelona's Champions League exit, which followed a 2-1 reverse to Real Madrid in the Spanish League, leaves the Copa del Rey final against Athletic Bilbao on 20 May as Guardiola's only realistic remaining chance of winning more silverware.

Their Champions League exit also marks the end of Barcelona's attempt to become the first team since AC Milan in 1990 to successfully defend their European title, after victories in three of the last six years.

Former Barcelona defender Michael Reiziger insists that the defeat should not mark a watershed for a club that has also lifted the Spanish Super Cup, European Super Cup and Club World Cup earlier this season.

"That is football, you have high periods and then you have low ones."