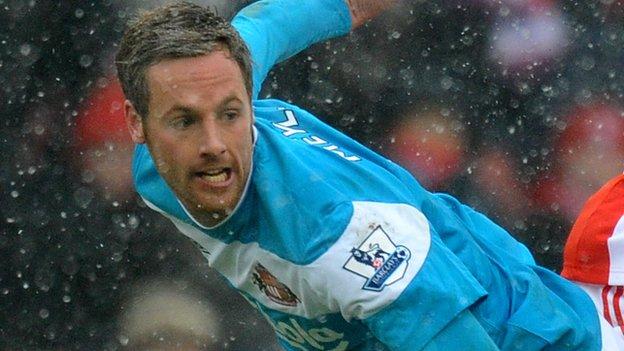 Sunderland midfielder David Meyler has said the experience of two knee injury setbacks has taught him the value of patience in making a first-team return.

Meyler, 22, has been limited to nine appearances this season following his return from a second cruciate ligament injury in October.

"I need to give my knee time," Meyler told BBC Newcastle.

"I'd rather wait another couple of weeks in training than have another 18 months out."

Itwas against Manchester United at the Stadium of Light in May 2010 that the Republic of Ireland under-21 international suffered the initial injury, collapsing to the turf in a challenge with Patrice Evra.

He went on to make just five further appearances on his return to the Black Cats first team the following campaign, but has remained trouble-free since his third comeback.

"Two years ago when it first happened I was told I might never play football again.

"To then spend nine months out, and then do it all over again, it's fine, I'm back now, getting fitter, stronger and I'm working hard.

"There's no rush at the moment to play as many games as I can, I just need to keep myself fit, keep myself ticking over.