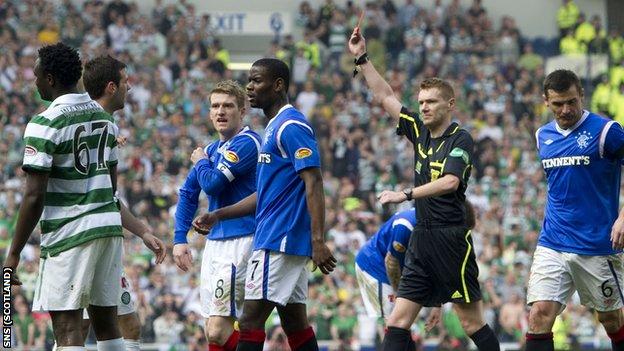 Murray replaces Craig Thomson, who has withdrawn from the fixture because of family reasons.

Celtic, who have clinched the Scottish Premier League title, go into the game 18 points ahead of their rivals.

Murray was in charge of the last derby, a 3-2 win for Rangers at Ibrox on 25 March, that prevented Celtic from clinching the title that day.

In a statement, the Scottish FA said: "The SFA can confirm that, due to family reasons, Craig Thomson is now unable to referee this weekend's Clydesdale Bank Premier League match between Rangers and Celtic at Celtic Park, as previously announced.

"Calum Murray has now been appointed to the match."

Celtic emerged victors the last time the sides met at Celtic Park in December, Joe Ledley heading the only goal of the game.