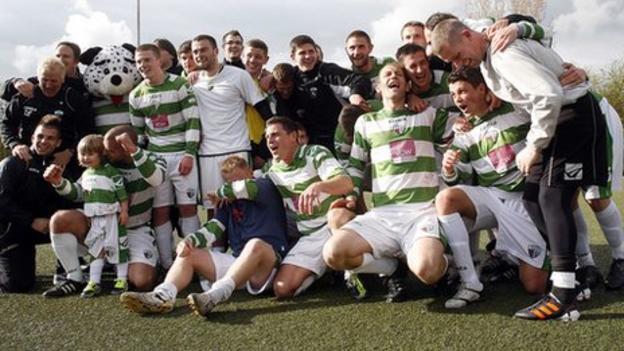 In last week's column I predicted Bangor City would retain the Welsh Premier League title with a victory against The New Saints on Saturday.

How wrong I was as The New Saints totally annihilated Bangor with an accomplished performance worthy of securing any league title and a place in next season's Champions League.

We didn't get the finale we had all hoped for on Saturday, but credit must go to The New Saints' coaching team, Craig Harrison and Carl Darlington, as they played Bangor at their own game, which reaped its rewards.

The movement of Greg Draper, who helped himself to a hat-trick, was too much for Neville Powell's side in the 5-0 demolition, a score that flattered Bangor.

The New Saints will aim to complete a League and Cup double when they take on Cefn Druids of the Huws Gray Cymru Alliance in the Welsh Cup final at Bangor's Nantporth stadium on May 5th.

Cefn Druids are now, subject to attaining the Uefa Licence, assured of their place in the Europa League Second Qualifying Round for next season due to the The New Saints' title triumph on Saturday.

Bangor have competed extremely well at the top of the league against two full time clubs in The New Saints and Neath, but Saturday's match was one step too far for them this season.

Powell's men can now look forward to a fifth successive season of European football as they enter the Europa League, along with the play-off winners, at the First Qualifying Round stage.

Of the clubs contesting the Europa League play-offs, Llanelli are the form side going in with three successive victories and two draws in their last five games. As it stands they will entertain Bala at Stebonheath.

The second semi-final will see Neath at home to the winners of Prestatyn's match against Airbus, who finished top of the Play-Off Conference.

Prestatyn have gone 14 games without a victory and they did not pick up a single point in the Championship Conference, although Prestatyn's manager, Neil Gibson has been happy with his team's performances leading up to the play-offs.

It wasn't a shock to me that Newtown and Carmarthen finished in the bottom two. Mark Aizlewood has done a tremendous job since taking over the reins from Tomi Morgan in January at Carmarthen.

They were 13 minutes from safety on Saturday, but an Andy Jones own goal gave Aberystwyth a vital win against Newtown and catapulted them into eighth spot above Carmarthen, Afan Lido and Port Talbot.

The win for the Seasiders not only secured their Welsh Premier League status but also gives them a shout of gaining a place in the end of season Europa League play-offs. That all hinges on the outcome of Neath's appeal against the decision to deny them a Domestic Licence, to play in next season's WPL, and a Uefa Licence, allowing them to play in the Europa League should they qualify.

Neath's appeal will be heard by an independent panel on Friday, along with The New Saints' appeal after they were also refused the Domestic Licence at the first time of asking.

If both The New Saints and Neath fail to gain their Domestic Licence then they will be relegated from the WPL. Carmarthen and Newtown will have a stay of execution and survive to fight another day.

Connah's Quay Nomads have already secured promotion to the WPL from the Cymru Alliance after clinching a second successive league title. Unlike last season they have now been awarded the Domestic Licence.

Promotion from the MacWhirter League looks like going to down to the wire as, Haverfordwest need to finish as runners-up to gain promotion as league champions Cambrian & Clydach have not applied for promotion.

Haverfordwest are currently four points clear of third placed Taffs Well and they could seal promotion back into the WPL if Taffs Well either lose to AFC Porth on Saturday or to bottom of the league side Caerau (Ely) on Tuesday, 1 May in their final game.

This means both Haverfordwest and Carmarthen will have an anxious few days ahead to see who plays in next season's WPL.