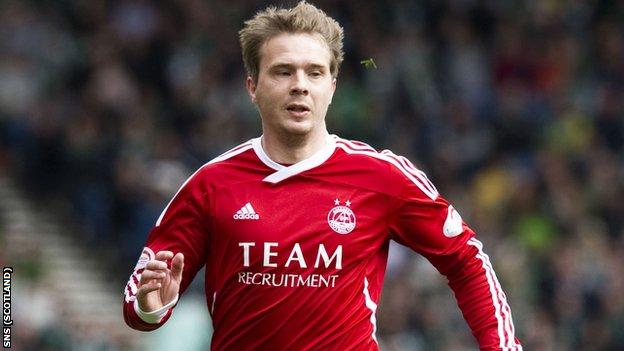 Aberdeen striker Darren Mackie will not be offered a new contract at the end of the season.

He is one of six first-team players who have been told he is no longer part of manager Craig Brown's plans.

Mackie, 29, has spent his whole career with the Dons, apart from a loan spell with Inverness Caledonian Thistle in 2004, and was given a testimonial against Villarreal in July.

"It is never easy telling a player that his future lies elsewhere and it is one of the worst aspects of being a manager," said Brown.

"I'd like to thank all of the guys who are moving on for their contribution, in particular Darren, who has been a fantastic servant to this club, and wish them all the very best for the future."

Chief executive Duncan Fraser added: "I'd like to echo Craig's comments, in particular regarding Darren, who has been a tremendous ambassador for this club for such a long time, with a first class attitude, both on and off the park."

Icelandic international Kari Arnason rejected a new contract offer at the turn of the year, while defender Mark Reynolds will see his loan from Sheffield Wednesday expire at the end of the campaign.