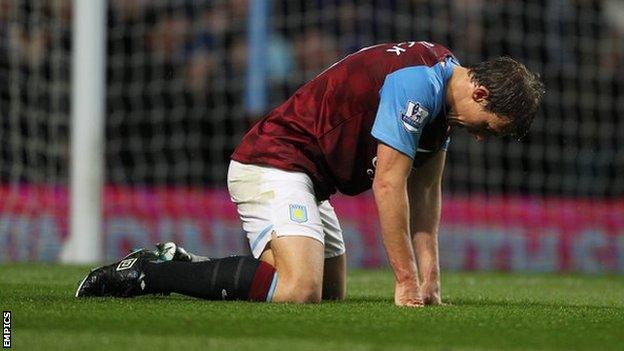 The match turned on a penalty conceded by Carlos Cuellar for his challenge on visiting midfielder Mark Davies.

But Warnock told BBC WM: "That's nothing to do with the manager.

"The lads have gone 1-0 up, are playing well and then an individual error gets them back into the game."

Bolton then instantly scored the winner, and Warnock, who had put Villa ahead just minutes earlier, admitted: "The lads have got to take the criticism.

"We're the ones on the pitch. The manager prepares us as best as he can for any game. It doesn't matter whether it's Mourinho, Guardiola or any of the top managers, when you go out on the pitch it's down to the players."

Defeat by Bolton leaves Warnock's side just three points above the relegation zone, and the Liverpudlian - who came through a successful relegation battle with Blackburn Rovers three seasons ago - continued: "In this game, there's no time for inexperience and there's no time for learning. We've got to stand up and be counted.

"We need our experienced boys to rally the lads - we're in a massive battle now. It's the toughest battle these lads are ever going to face in their career and we've got to fight tooth and nail to get out of it. But it's one we're up for."

"We will continue to support and rely on our manager and the squad and therefore give them our full support," they said.

But they admitted that "right now everyone connected with Villa is hurting badly", adding: "We very openly acknowledge the frustrations of Villa fans and share in them completely."

Villa are now only three points clear of 18th-placed Bolton, who have a game in hand.

And their last three matches are from easy for McLeish, whose final day relegation with Birmingham City was greeted with glee by Villa's fans 11 months ago.

McLeish's men then host Tottenham Hotspur at Villa Park, where they have won just four times in the league this season, before finishing the season at Norwich.